Making People Feel Good was a massage therapist act from Season 13 of America's Got Talent. He was eliminated in the audition round.

He has been massaging for over 51 years and has given over 50,000 massages. He has massaged over 2,400 Olympic athletes and have been picked by USA TRACK and FIELD to 25 Olympic and Internation Medical Teams. He has been the Massage Therapist for the University of Southern California Men's and Women's Track Team for the last 19 years, as well as the Massage Therapist for the USA Volleyball Teams Men and Women for the last 10 years.

He is also a proud member of the Alpha Delta Phi Fraternity Adelpho Chapter 1987. [1]

Making People Feel Good's audition in Episode 1305 consisted of giving Howie Mandel a massage while dancing. Howie (his buzzer was pressed by Mel B per his request), Mel (Simon Cowell buzzed for her), Heidi Klum, and Simon all buzzed the act. All four judges voted "No", eliminating the act from the competition. 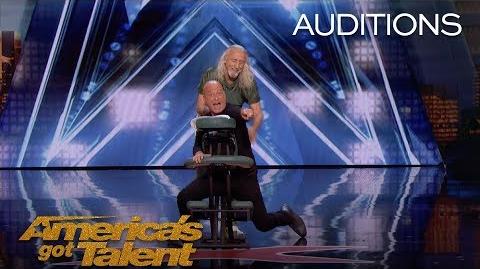 Retrieved from "https://agt.fandom.com/wiki/Making_People_Feel_Good?oldid=119978"
Community content is available under CC-BY-SA unless otherwise noted.