Judge Cuts
Marc & Kiri were a ballroom dancer duo act from Season 10 of America's Got Talent. They were eliminated in the Judge Cuts.

Marc Brewer is one of the Midwest's most sought after Latin Dance instructors, performers, and choreographers. Brewer is certified in 9 American competitive ballroom dances and proficient in Ballet, Modern, Jazz, and Hip-hop. Latin dance is Marc's specialty and main focus with extensive training and experience in Salsa, Bachata, and Zouk. Brewer also has certification in Brazilian Zouk overseen by Carlos Da Silva (Brazil/Prague).

Kiri Chapman started ballet at an early age, leaving home at the age of thirteen to study at the Kirov Academy of Ballet in Washington DC. Chapman graduated valedictorian from the Kirov Academy in 2005 and immediately joined the corps of Tulsa Ballet Theater in Oklahoma. During her three seasons with the company, from 2005-2008, she performed nationally and internationally choreography from Twyla Tharp, Balanchine, Nacho Duato, Ma Cong, Petipa and many others. Kiri has been recognized in several internationally acclaimed ballet competitions: Youth America Grand Prix New York Finals (top twelve), Jackson USA IBC (competitor), and New York IBC (semi-finalist). Currently, she teaches at the University of Michigan’s UMove program, “Swing City Dance”, “The Glass Room” and coaches pre-professional students privately. During the last year and a half, Ms. Chapman has familiarized herself in several partnering dances. She is presently focused in Latin Dance and Cabaret. [1]

Marc & Kiri's audition was never televised. It is unknown whether or not the two were buzzed, but at least three judges voted "Yes," sending the duo to the Judge Cuts round.

Marc & Kiri's Judge Cuts performance in Episode 1008 consisted of dancing a ballroom routine with multiple lifts. Their performance was not strong enough for the judges to send them to the Quarterfinals, eliminating them from the competition along with Duo Ignite, instead of Freelusion Dance Company. 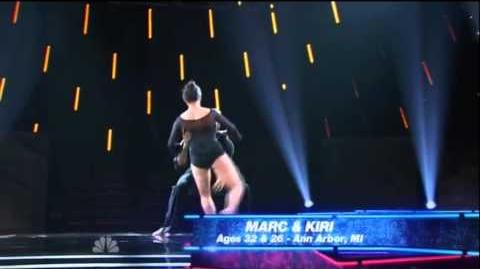