Semifinalist
Mario and Jenny was a danger juggler duo act from Season 4 of America's Got Talent. The duo was eliminated in the Semifinals.

Husband and wife duo, Mario Ferreira and Jennifer "Jenny" Romas-Ferreira take the stage to showcase their talents including juggling, dancing and comedy. Mario represents the seventh generation of entertaining Ferreira's. At the age of eight he started walking in his father's footsteps on the tight wire.

Jennifer got her start as a gymnast and went on to become a Minnesota State Floor Champion. Her coaches thought she might benefit from taking dance to improve her gymnastics and this flipped Jennifer in a new direction. With huge support from her parents, she left Minnesota for a dance scholarship in Chicago. Today she enjoys teaching and judging national dance competitions for the up and coming little stars, but her true passion is performing and working with Mario. [1]

Mario and Jenny's audition in Episode 405 consisted of Mario sawing two pieces of wood in half with a chainsaw and then juggling three powered-on chainsaws. Piers Morgan, Sharon Osbourne, and David Hasselhoff all voted "Yes", sending the duo to the Vegas Round. 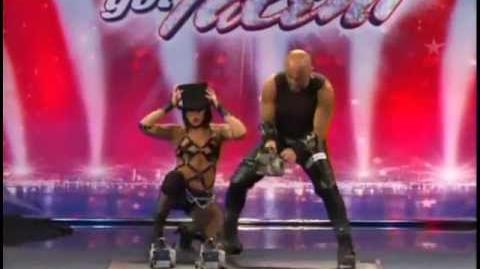 Mario and Jenny appeared without performing in the Vegas Round. The duo's audition was strong enough for the judges to send it to the Quarterfinals in Episode 412.

Mario and Jenny's Quarterfinals performance in Episode 417 consisted of Mario juggling three flaming guitars, balancing a guitar on his chin, twirling a flaming hollow cube, and fire breathing as Jenny danced. Mario & Jenny received enough votes to be sent to the Semifinals in Episode 418 instead of Marcus Terell & The Serenades. 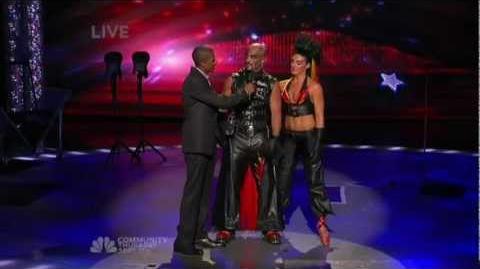 Mario & Jenny's Week 2 Semifinals performance in Episode 423 consisted of Jenny dancing, Mario tap dancing, Jenny pole dancing, Mario drumming, and Mario balancing a flaming drum on his chin. Piers Morgan buzzed the act. Mario & Jenny did not receive enough votes to be sent to the Finals, eliminating the duo from the competition in Episode 424 instead of Recycled Percussion.