Semifinalist
Mark The Knife was a danger comedian act from Season 1 of America's Got Talent. He was eliminated in the Semifinals.

Mark Faje, sometimes called Mark the Knife or The World's Most Dangerous Comic, (born 1969), is a stand-up comedian who has performed his act around the world, including performances in seven circuses, Lazer Vaudeville and The Jim Rose Circus in 22 countries in 5 continents. Faje's signature acts include balancing a running lawnmower on his face, kicking a flaming bowling ball inserted with knives onto the side of his head, juggling a buzz-saw and a flaming chainsaw, performing card tricks with a live scorpion, and throwing knives around people.

Mark The Knife's audition in Episode 103 consisted of tossing a 13-pound bowling ball behind his back onto the side of his face with his foot. The ball was pierced with steak knives and set on fire. Also, a live black emperor scorpion was placed into his pants. Piers Morgan, Brandy Norwood, and David Hasselhoff all voted "Yes", sending Mark to the Semifinals. 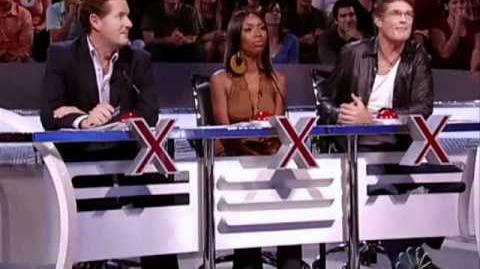 Mark The Knife's Week 2 Semifinals performance in Episode 106 consisted of placing a baby doll on his foot, kicking it high in the air, and catching it on the tip of a stick in his mouth. A second trick (which got him banned in three countries) consisted of balancing a running lawnmower on his chin as heads of lettuce were tossed into the lawnmower's blades. Although David Hasselhoff gave Mark a "✓" vote, Piers Morgan and Brandy Norwood both gave him "X" votes. Mark did not receive enough votes to finish in at least second place in America's Vote, eliminating him from the competition in Episode 107 instead of At Last and Natasha Le. 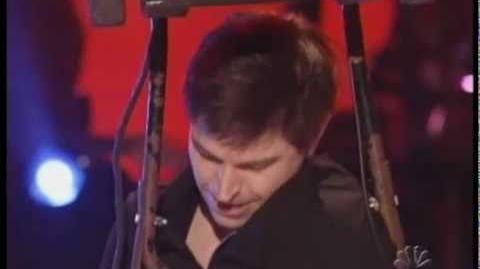