America's Got Talent Wiki
Register
Don't have an account?
Sign In
Advertisement
in: Acts, Accepted Acts, Dancers,
and 9 more

Quarterfinalist
Matt & Anthony, also known as Anthony and Matt, was a singer/guitarist and tap dancer duo act from Season 4 of America's Got Talent. The duo was eliminated in the Quarterfinals.

The “Matt and Anthony” duet includes Matt Lucas, a native of Grove City, Pennsylvania, and Anthony Morigerato, a native of Albany, New York, who met at Marymount Manhattan College in 2004 as roommates.

Lucas was going for his bachelor’s in writing for the stage; Morigerato, for dance. It wasn’t long before the two realized that they could combine talents. "One day I was playing my guitar and he had his tap shoes, and he struck a moment to dance," Lucas said. Lucas and Morigerato found they had the same taste in music, mainly old-style rhythm and blues.

Their Matt and Anthony act--with Morigerato tap dancing and Lucas on vocals and guitar--“morphed” out of A.M. Dance Project, which Morigerato began in 2005. With Morigerato as artistic director and Lucas as musical director, A.M.--Morigerato’s initials--includes self-produced shows, which are rehearsed in rented studio space and so far has included up to 12 dancers.

Their self-funded shows have been in venues as large as the New Jersey Performing Arts Center in Newark, “which ended up costing us a lot of money,” Lucas said. Guest appearances have included “anything from little hole-in-the-wall dance studios here” to 20-minute gigs at various conventions, he added.

He and Morigerato have combined with other noted artists like teacher and popular tap dancer Mike Minnery. The two never normally audition their work, but heard of the America's Got Talent auditions after performing for a benefit in New Jersey. [1]

Anthony and Matt's audition in Episode 408 consisted of Anthony tap dancing and Matt singing Bill Withers' "Use Me" while playing the guitar. Piers Morgan, Sharon Osbourne, and David Hasselhoff all voted "Yes", sending the duo to the Vegas Round. 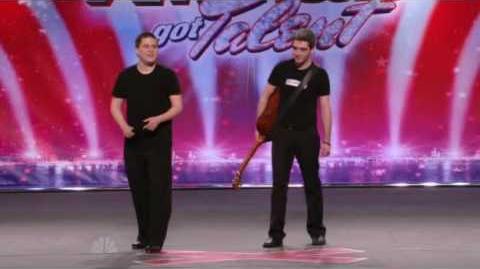 Anthony and Matt appeared without performing in the Vegas Round. The duo's audition was strong enough for the judges to send it to the Quarterfinals in Episode 412.

Matt & Anthony's Quarterfinals performance in Episode 419 consisted of Anthony tap dancing and Matt singing Aretha Franklin's "Think" while playing the guitar, all while moving up and down movable stairs. Piers Morgan buzzed the act. Matt & Anthony did not receive enough votes to be sent to the Semifinals, eliminating the duo from the competition in Episode 420 along with Ishaara, instead of Recycled Percussion. 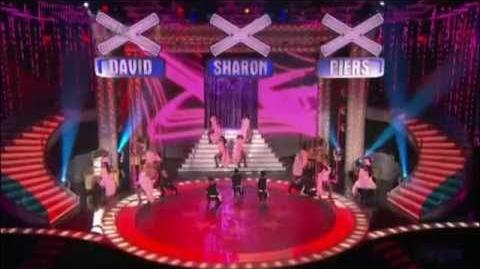