America's Got Talent Wiki
Register
Don't have an account?
Sign In
Advertisement
in: Acts, Rejected Acts, Season 3 Acts,
and 3 more

None
Michael Trixx was a magician act from Season 3 of America's Got Talent. He was eliminated in the audition round.

Michael Trixx has won many magic awards including South Carolina and Florida State Championship of stage magic. He has amazed audiences across the US , The UK and Mexico. Due to his past (and present) passion for Rock N’ Roll, the effects he presents are backed with many of Trixx’ favorite tunes and his high energy. His show consists of many classic and modern magic effects including the appearance and vanishing of many live birds, levitations, productions, vanishes and confetti blizzard from literally nowhere. 1

Michael Trixx's audition in Episode 307 consisted of performing tricks such as turning a feather into a wand, making a handkerchief and an umbrella appear out of thin air, using flames to make two bandanas appear, and then using those bandanas to make a candle disappear, all to "You've Got Another Thing Comin'". Piers Morgan and David Hasselhoff both buzzed the act. Piers, Sharon Osbourne, and David all voted "No", eliminating Michael from the competition. 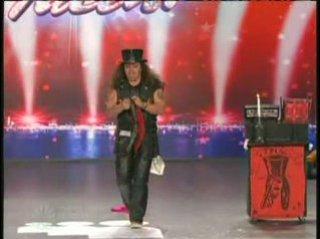