Milton Patton was a country singer act from Season 8 of America's Got Talent. He was eliminated in the Vegas Round.

Milton Patton is from Forrest  City, Arkansas. He started singing after a bad relationship with an ex-girlfriend. He happened to be driving to work when he heard "Whiskey Lullaby" on the radio, and because the song related to the story of his break-up so closely, Milton was inspired to pursue country music. Milton has gone on to work as an independent musicians. Now 23, Milton is preparing to release a debut CD and a single, and he performs live shows regularly in Arkansas, Oklahoma, Missouri and Kansas. He hopes to organize a national tour in the second half of 2015. He has fans all over the country and overseas. More at: www.miltonpattonmusic.com 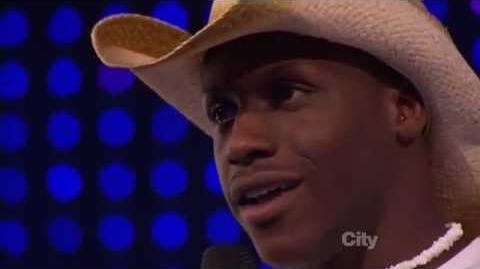 Milton Patton was one of the acts that were eliminated without performing in Las Vegas in Episode 808.

Retrieved from "https://agt.fandom.com/wiki/Milton_Patton?oldid=174913"
Community content is available under CC-BY-SA unless otherwise noted.