Judge Cuts
Miranda Cunha was a singer/burlesque dancer act from Season 11 of America's Got Talent. She was eliminated before the Judge Cuts.

Miranda (Candy) was beyond her years as a vocalist and composer at the age of 12 and was the main feature in her group El Groupo Candy where she would bring the house down with her performances in Mexico City. El Groupo Candy was the first female rock group to ever be presented at Alamaria Park in Mexico City and was given a plaque by the Mexican Government. Candy was so popular to the many fans and to show their appreciation the Mexico City Times News Paper put a beautiful colored picture and article on the front page which made an incredible statement making Candy's first appearance go down in the archives of history in Mexico City. The El Senior Real Club still to this day praises the performances presented by Candy Upon her memorable engagement there. Upon her return to the United States, Candy was featured in a movie called the Young Graduates and became a member of ASCAP for her compositions written for the movie at the age of l3. She has since gone on to perform across the world, produce and act in numerous films, and always give back to those in need. [1]

Miranda Cunha's audition in Episode 1103 consisted of singing "Bésame Mucho" while dancing seductively around Simon Cowell. She ended the performance by kissing Simon on the lips. Simon, Howie Mandel, Mel B, and Heidi Klum all voted "Yes," sending Miranda to the Judge Cuts. 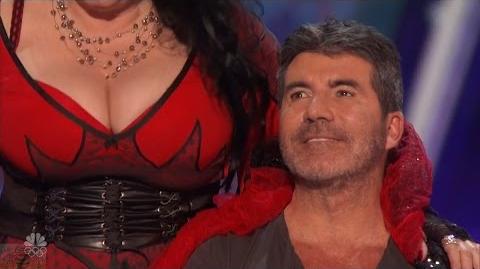 Miranda Cunha did not perform in the Judge Cuts round, meaning she either withdrew or was cut by the judges before this stage of the competition.