America's Got Talent Wiki
Register
Don't have an account?
Sign In
Advertisement
in: Acts, Accepted Acts, Dance Duos,
and 10 more

Quarterfinalist
Mirror Image was a vocal and dance duo act from Season 12 of America's Got Talent. They were eliminated in the Quarterfinals.

Mirror Image is from Pittsburgh, Pennsylvania. The duo consists of twin singing-and-dancing brothers Colton and Trent Edwards. They reside with their parents, Kevin and Gia.

The brothers have been jointly expressing their talents all their lives. Trent placed second in a Believe National Talent competition for soloists ages 15-19, with his performance of "500 Miles" in the lyrical category in Wheeling, West Virginia.

Colton and Trent were among a group of entrants from DeStella Dance Centre in Export that placed in the 2016 Pittsburgh Showstopper dance competition. [1]

Mirror Image's audition in Episode 1206 consisted of first singing Jackson 5's "Who's Lovin You" and then dancing to The Black Eyed Peas' "Pump It". Although Simon Cowell voted "No", Howie Mandel, Mel B, and Heidi Klum voted "Yes", sending the duo to the Judge Cuts.

Mirror Image's Judge Cuts performance in Episode 1208 consisted of singing The Mamas & the Papas' "California Dreamin'" and dancing to Sia's "The Greatest". Simon Cowell buzzed the act. Mel B gave the duo a standing ovation. Mirror Image's performance was strong enough for the judges to send it to the Quarterfinals instead of The Quiddlers.

Mirror Image's Week 2 Quarterfinals performance in Episode 1213 consisted of singing Queen's "Somebody to Love" and then dancing to Bell Biv DeVoe's "Poison" and Kris Kross' "Jump". Simon Cowell buzzed the act, but Howie Mandel, Mel B and Heidi Klum gave them standing ovations. Mirror Image did not receive enough votes to advance to the Semifinals in Episode 1214, eliminating them from the competition instead of Celine Tam and Merrick Hanna. 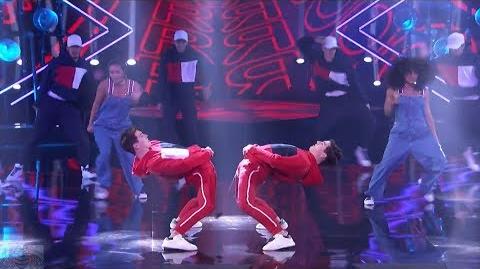 Colton and Trent auditioned for the 16th season of So You Think You Can Dance in 2019.  Both were eliminated at the Academy - Trent going out in the hip-hop round, Colton in the ballroom round.