Miss Fuego the Phoenix was a singing costumed phoenix act from Season 11 of America's Got Talent. It was eliminated in the audition round.

Jonathan Kidder has worked as a puppet designer, builder and performer for the past decade. He's worked for companies such as Disney and Kaiser Permanente and shows such as Peter Pan Threesixty. Now he's spreading his wings and focusing on his own characters like Miss Fuego the Phoenix. [1]

Miss Fuego the Phoenix's audition in Episode 1103 consisted of singing Gloria Gaynor's "I Will Survive" while dressed in a phoenix costume. Howie Mandel, Mel B, Heidi Klum, and Simon Cowell all buzzed the act. All four judges voted "No," eliminating Miss Fuego from the competition. 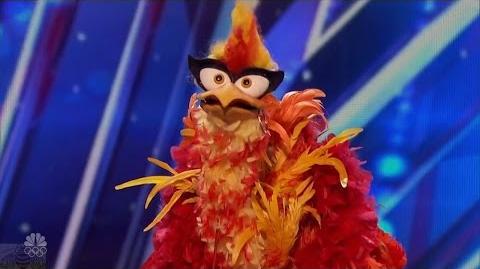 Retrieved from "https://agt.fandom.com/wiki/Miss_Fuego_the_Phoenix?oldid=65784"
Community content is available under CC-BY-SA unless otherwise noted.