America's Got Talent Wiki
Register
Don't have an account?
Sign In
Advertisement
in: Acts, Accepted Acts, Jugglers,
and 7 more

Quarterfinalist
Mochi was a multimedia juggler act from Season 13 of America's Got Talent. He was eliminated in the Quarterfinals in the Judges' Choice.

With thrilling showmanship, Yusaku Mochizuki raises the bar of live performance: incorporating tap dance, video art, LED diabolos, digital poi sticks, and more, he is an outstanding entertainer for the 21st century. World Champion performer Yusaku Mochizuki started juggling in his hometown of Shizuoka, Japan in 2001 when he was 13 years old, and now he works actively presenting his creative work as an artist all over the world on TV and at festivals, theaters, corporate functions, and events worldwide. For him, juggling is an essential base to express himself that merges art, sports, and performing arts. Within the world of juggling, Yusaku Mochizuki specializes in the diabolo, noted for his characteristically precise control and sense of extreme speed in his performances. Moreover, he has taken juggling beyond the circus and the street, experimenting with performances using video and performing on television and on many of the greatest stages and performing arts centers in the world, such as at the Festival du Cannes, the Ricardo Montalbán Theatre, Cirque du Demain, and the Taichung Arts Festival to name a few. In 2015, Yusaku Mochizuki achieved his dream, winning gold at the International Jugglers’ Association world championship and thereby officially becoming the world’s top diabolo artist. He is a former member of the world-renowned performance group enra, fusing visual art, dance, and juggling. [1]

Mochi's audition in Episode 1302 consisted of performing a diabolo routine, consisting of diabolo tricks such as spins and tossing the diabolo in the air, all in sync with a videomapped projection behind him. Howie Mandel, Mel B, Heidi Klum, and Simon Cowell all voted "Yes", sending Mochi to the Judge Cuts. 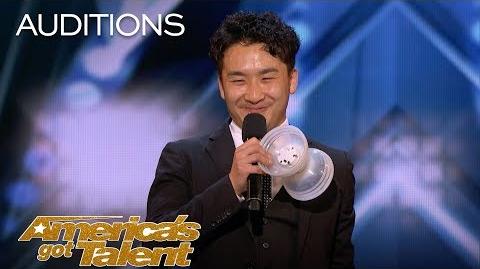 Mochi's Judge Cuts performance in Episode 1307 consisted of performing a juggling act using his diabolo with a projection going on behind him. Halfway through the routine, Mochi added a second diabolo, and used both in the rest of the routine. Howie, Mel B, Heidi, Simon and guest judge Ken Jeong all gave him standing ovations. His performance was strong enough for the judges to send him to the Quarterfinals. 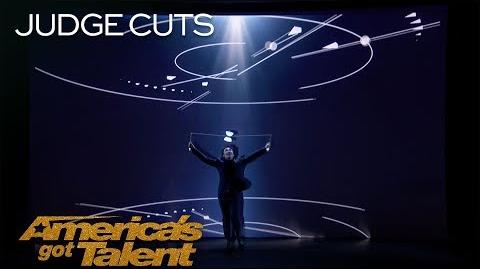 Mochi's Week 1 Quarterfinals performance in Episode 1311 consisted of performing tricks with a diabolo that shot sparks as background graphics matched the speed of the routine. Howie Mandel, Heidi Klum, and Simon Cowell gave him standing ovations. Mochi finished in sixth, seventh or eighth place in America's Vote. In the Dunkin' Save, he received fewer online votes than Angel City Chorale. In the Judges' Choice, Heidi Klum and Simon Cowell didn't vote for him, but Howie Mandel and Mel B did, forcing a tiebreaker; whichever act had received more votes from America would progress. He received fewer votes than Junior New System, eliminating him from the competition in Episode 1312. 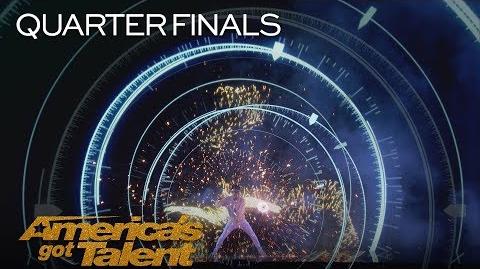