Mothmen Dance was an acrobatic dance group act from Season 9 of America's Got Talent. It was eliminated in the Quarterfinals.

Created by Jason Whicker and Jennifer Kelly of On the FLY Productions, Mothmen Dance is a group of aerialists, dancers, flyers and acro-artists. Hailing from all over the country, they first met three days before their audition for America's Got Talent. Mothmen can often be found climbing on anything from buildings to playground equipment for practice, and they live to perform onstage. The Mothmen (and women) have spent most of their lives training, performing and dreaming. 1

Mothmen Dance's audition in Episode 905 consisted of dancing as a group and using wires to create the illusion of a member of the crew walking on air. Howard Stern, Heidi Klum, Mel B, and Howie Mandel all voted "Yes," sending the group to Judgment Week. 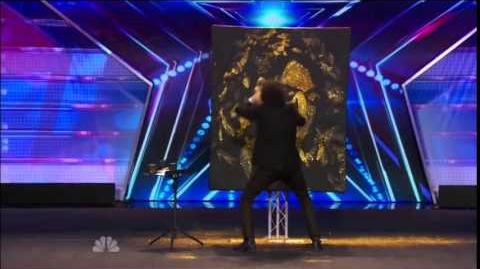 Mothmen Dance's Week 4 Quarterfinals performance in Episode 915 consisted of a dance and aerial routine involving a story about a man transporting other people onto the moon and fighting them. Howie Mandel gave the group a standing ovation. The act did not receive enough votes to be sent to the Semifinals, eliminating them from the competition in Episode 916, instead of Quintavious Johnson. 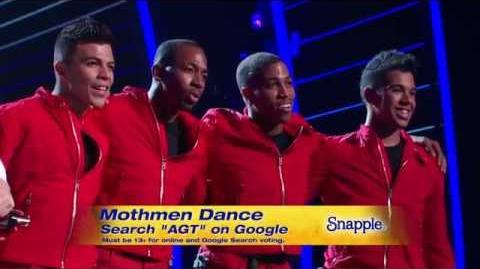 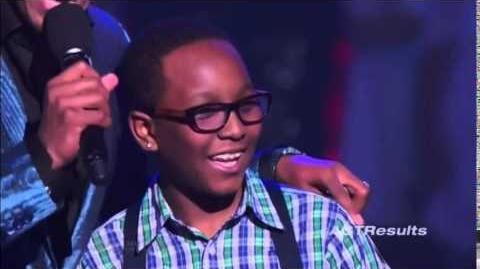 Retrieved from "https://agt.fandom.com/wiki/Mothmen_Dance?oldid=49364"
Community content is available under CC-BY-SA unless otherwise noted.