Judge Cuts
Mr. Fudge was a balloon artist act from Season 10 of America's Got Talent. He was eliminated before the Judge Cuts.

Known as "Your Balloon Man," Mr. Fudge, has been twisting balloons since he was 8 years old. After attending a summer camp and falling in love with the idea of using his creativity to make all kinds of amazing things out of balloons, he went home and started teaching himself about the art. After years of study and hard work, he finally graduated high school and is now off performing all across the globe with his balloons, magic, and comedy. Head Trainer of a balloon talent agency, he was able to train and work with over 300 balloon artist nationwide for a span of over 5 years. He has been invited to teach at a number of industry seminars and has most recently returned from a tour of Japan where he performed for the US troops at the Kadena Air Base in Okinawa.

After becoming an expert in his field, Mr. Fudge has even created balloon training DVDs. Each teaching hundreds of people how to get their start in twisting, Mr. Fudge has contributed to the spread of balloon art. Still putting himself through college, Mr. Fudge feels that the field of balloon art is a fantastic way to earn a living, providing him with a much needed income and also the ability to put smiles on the faces of children world wide. In over 14 years of ballooning, he has earned titles such as: Balloon Olympics Speed Twisting Champion, Balloon Distractions Head Trainer, Third Place New Diamond Competition 2006, TJam on the Road Best of Orlando Through the Door 2007, and First Place Diamond Seeker 2008.

Mr. Fudge has also traveled to China, Japan, Mexico, and all over the US. Currently, he resides in Tampa, Florida and continues to teach other balloon artists from around the world. In the meantime, he is also available for parties and events throughout Tampa, FL and enjoys working trade shows and corporate events as well. [1]

Mr. Fudge's audition in Episode 1005 consisted of putting a balloon in his assistant Cory Watts' nose, inflating it, and twisting it into the shape of a puppy. Heidi Klum buzzed the act. Although Heidi voted "No" Howard Stern, Mel B, and Howie Mandel voted "Yes," sending Mr. Fudge to the Judge Cuts round. 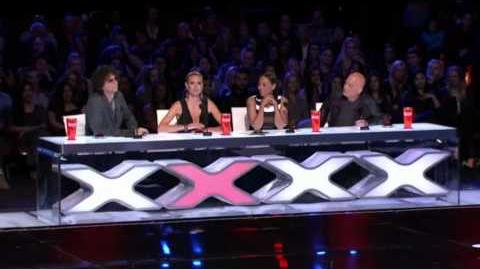 Mr. Fudge did not perform in the Judge Cuts round, meaning he either withdrew or was cut by the judges before this stage of the competition.