Mr. Splat was a novelty daredevil act from Season 11 of America's Got Talent. He was eliminated in the audition round.

Mr. Splat, whose real name is Greg Carpenter, is from Daytona Beach, Florida. He claims to have a passion for danger, though he admitted his performance would be a "goof thing." [1]

Mr. Splat's audition in Episode 1101 consisted of flopping into a pool of shaving cream. Howie Mandel, Mel B, Heidi Klum, and Simon Cowell all buzzed the act. All four judges voted "No," eliminating Mr. Splat from the competition. After the performance, some of the judges hopped into the pool and played around with each other. 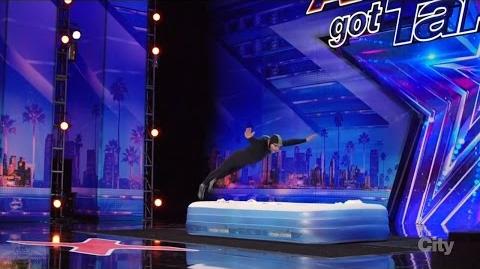 Retrieved from "https://agt.fandom.com/wiki/Mr._Splat?oldid=132781"
Community content is available under CC-BY-SA unless otherwise noted.