America's Got Talent Wiki
Register
Don't have an account?
Sign In
Advertisement
in: Acts, Rappers, Rejected Acts,
and 5 more

None
NaNa the Cat Lady was a rapper act from Season 13 of America's Got Talent. She was eliminated in the audition round.

Age 10: Life cahanging moment... My mom took me to the David Bowie concert. and the beautiful British Alien did something to me...

Age 12: My life as a bullied misfit started. Also joined a school brass band and started playing saxophone. Of course influenced by Bowie...

Age 15: Thanks to my mom's none-sense suggestion....., " I think you got a great sense of rhythm. you give me a great massage. Why don't you try drums?? ", I started to taking a drum lesson.

Age 18: Decided to move to America to pursue my stupid dream as an entertainer even though i'd nver been to anywhere outside of Japan and didnt know anybody in America. Just got a one way ticket and moved to Los Angeles

2008: Left Kill Kill Kill and Joined Spider Problem. also did some theatre job as a comedian alongside.

2010- current: My band stuff went down the hill..., So.., Decied to go back to my origin... Comedy & Music... Started NaNa & the Happy Cats and doing comedy / variety shows. also appeared in a music video, commercials and TV shows ( see resume).

The best way to get to know me is...., just come to see my shows or visit my facebook, twitter, Youtube and my website and see what i do... Ill try to keep you entertained.... [1]

NaNa appeared on The Gong Show in 2017. She was gonged and eliminated by the judges.

NaNa the Cat Lady's audition in Episode 1302 consisted of rapping her original song "Meow Wet Food" while Howie Mandel stood on stage, wearing cat ears and holding flash cards. Howie (Simon buzzed for him), Mel B, Heidi Klum, and Simon Cowell all buzzed the act. Howie, Heidi, and Simon voted "No", eliminating NaNa from the competition. 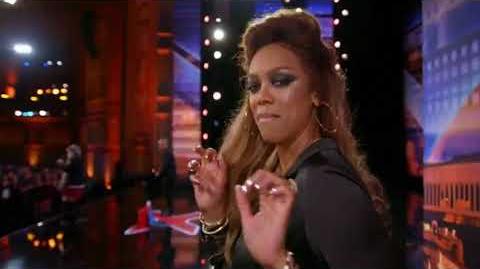