Natalie Ong was a singer act from Season 13 of America's Got Talent. She was eliminated before the Judge Cuts.

Natalie Ong, is on her way to stardom and being known as The New Voice of South East Asia. With proud Singaporean heritage, this petite pop princess can belt ballads like the best. Born in Singapore, Natalie's parents migrated to Australia when she was just 2 years old.


Having recently appeared on the 8th Season of The X Factor Australia (she made it to the Top 12), Natalie Ong wowed the audience and surprised the judges with her incredible vocal ability. Her audition performance of Christina Aguilera's "The Voice Within" has already been viewed over 800,000 times on Facebook with combined views of over 2+ million across the platforms.


With her breath-taking performances on Australian Television, Natalie Ong created a stir in Asia not seen before. Featured across all platforms of Singaporean media including The Straits Times, it is fair to say that Singapore is screaming for Natalie! Proud to be a role model for young girls Natalie exudes a maturity beyond her years and a natural likability.


Her aim is to stay true to her heritage whilst inspiring other young people to dream big and to follow their dreams.[1]

Natalie Ong's audition in Episode 1304 consisted of singing Sia's "Alive". The verdict was not televised, but Howie Mandel, Mel B, Heidi Klum, and Simon Cowell all voted "Yes", sending her to the Judge Cuts. 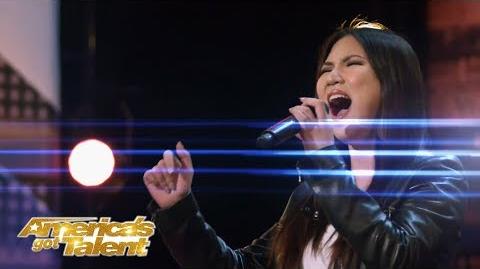 Natalie Ong did not perform in the Judge Cuts round, meaning she either withdrew or was cut by the judges before this stage of the competition.

Retrieved from "https://agt.fandom.com/wiki/Natalie_Ong?oldid=134837"
Community content is available under CC-BY-SA unless otherwise noted.