America's Got Talent Wiki
Register
Don't have an account?
Sign In
Advertisement
in: Acts, Accepted Acts, Magicians,
and 17 more

Born in Oakland, California, comedy magician Nathan Burton was bitten by the magic-bug at the age of four when he performed his first trick in front of his kindergarten class in the family’s hometown of Palm Desert, CA. Although nothing turned out as it should have – he was hooked – and decided then and there that magic was what he wanted to do for the rest of his life.

Between 1987 and 1991, Burton won four first place trophies at international stage competitions while competing against other magicians from the Soviet Union, Great Britain, Puerto Rico, Mexico and the United States. In 1996 Burton performed on NBC’s The World’s Wildest Magic sharing his unique comedy magic with a nationwide television audience; and after an incredible response from his appearance, the network featured Burton in its 1997 special World’s Greatest Magic 3.

Burton’s success continued and in 1997 he was a headliner at the Showboat Hotel and Casino in Atlantic City. European acclaim followed, including performing at Germany’s famed Wintergarten Variety as well as various television appearances worldwide in Paris, Athens, Lisbon and Santiago. Burton spent all of 2000 at the Hotel Lotte in South Korea, where he amazed audiences by vanishing an elephant nightly … a first for Korean audiences. After spending a year in Asia, Nathan was excited to perform for American audiences again as he was featured in the all-new Showgirls of Magic in Las Vegas. After performing nightly in Whisper at Harrah’s in Reno, Nevada, Burton headed back to Las Vegas in 2003 to perform in V – The Ultimate Variety Show, first at the Venetian Hotel and then the Aladdin Hotel & Casino.

In 2005, Burton was back in the national TV spotlight as the only magician in E! Entertainment’s The Entertainer starring Wayne Newton, which was seen by an estimated audience of 95 million viewers worldwide. Later that year, Burton created for himself the Ultimate Las Vegas Showgirl Challenge by spending seven nights inside a sealed box with seven showgirls – a stunt that received national attention from E! Entertainment and CNN’s Larry King. On May 25, 2006 “Nathan Burton Comedy Magic” opened at the V Theater at the Aladdin Hotel & Casino featuring 60-minutes of Burton’s signature fast-paced performance that combines large stage illusions, comedy and street magic. [1]

Nathan Burton's audition in Episode 101 consisted of creating the illusion of a bowling ball appearing out of a small book of paper, being "burned" by the "microwave of death" and appearing dark-skinned, and then returning inside the microwave and reverting to his normal self. Piers Morgan buzzed the act. Although Piers voted "No," Brandy Norwood, and David Hasselhoff both voted "Yes," sending Nathan to the Semifinals. 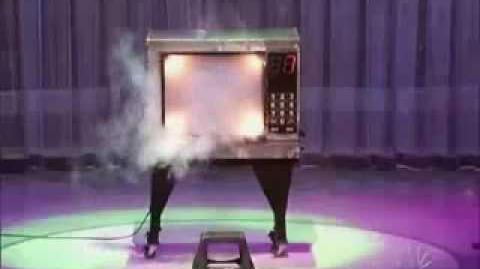 Nathan Burton's Week 3 Semifinals performance in Episode 108 consisted of creating the illusion of four women appearing in a clear box from out of nowhere and Nathan being rolled into paper, shot out of a cannon, and appearing behind the judges. Piers Morgan, Brandy Norwood, and David Hasselhoff all gave Nathan "✓" votes. Nathan finished in second place in America's Vote, eliminating him from the competition in Episode 109 instead of first-place vote-getter Bianca Ryan. 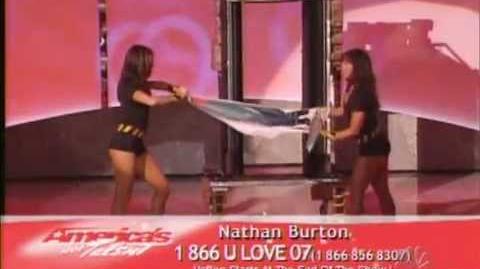 Nathan Burton was brought back for the Wild Card Show because he finished in second place in America's vote in Week 2. His performance in Episode 112 consisted of creating the illusion of a folded napkin turning into snow and a snowmobile appearing out of nowhere. Piers Morgan, Brandy Norwood and David Hasselhoff all gave him "✓" votes. Nathan again finished in second place in America's Vote, eliminating him from the competition in Episode 113 instead of first-place vote-getter David & Dania - Quick Change.

Nathan Burton returned in Season 4. His second audition in Episode 407 consisted of creating the illusion of a girl disappearing from underneath a cloth and appearing from thin air on a higher platform. Piers Morgan, Sharon Osbourne, and David Hasselhoff all voted "Yes," sending Nathan to the Vegas Round. 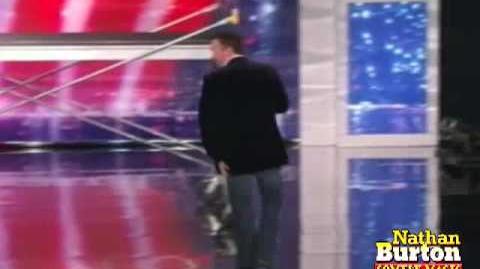 Nathan Burton was one of the 25 acts eliminated in the first Vegas Round cuts in Episode 411, at the Las Vegas Airport.

On March 3, 2008, Burton signed a deal with Flamingo Las Vegas to perform in its main showroom – sharing space with the likes of George Wallace and Toni Braxton. “Nathan Burton Comedy Magic” opened at the Flamingo Las Vegas on April 21, 2008. [2]

Nathan appeared on Season 3 of Penn & Teller: Fool Us, but did not fool the pair.

He was also a guest performer in Season 7 in Episode 729 of America's Got Talent. 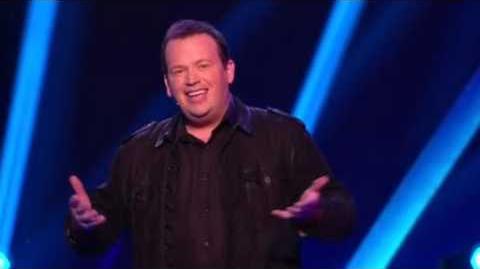