Nathan Spare was a fire breather act from Season 13 of America's Got Talent. He was eliminated before the Judge Cuts.

My name is Nathan Spare and performing is my passion. I have been lucky enough to have been performing in professional shows for several years now. I am extremely versatile when it comes to the skills I can do and I am looking for exciting venues to showcase them in. [1]

Nathan Spare's audition in Episode 1303 consisted of him blowing fire while scantily clad men posed around him. The verdict was not televised, but while Howie Mandel voted "No", Mel B, Heidi Klum, and Simon Cowell voted "Yes", sending Nathan to the Judge Cuts. 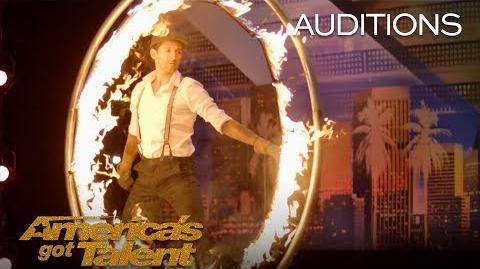 Nathan Spare did not perform in the Judge Cuts round, meaning he either withdrew or was cut by the judges before this stage of the competition.

Retrieved from "https://agt.fandom.com/wiki/Nathan_Spare?oldid=120002"
Community content is available under CC-BY-SA unless otherwise noted.