Judge Cuts
Oksana Grishina was a contemporary dancer act from Season 11 of America's Got Talent. She was eliminated in the Judge Cuts.

Oksana Grishina is a female bodybuilder from Russia. She moved to the USA in 2004 after winning her first IFBB card, to continue competing. She has served as the image of Gaspari nutrition, and currenty as the image of Nebbia Fitness and San nutrition. She is best known for basing her perfomance on well known public characters, such as Michael Jackson or the joker.

Oksana Grishina's audition was never televised. It is unknown whether or not she was buzzed, but at least three judges voted "Yes," sending Oksana to the Judge Cuts.

Oksana Grishina's Judge Cuts performance in Episode 1110 consisted of dancing contemporarily. One trick involved switching her dress color from black to white. Oksana's performance was not strong enough for the judges to send her to the Quarterfinals, eliminating her from the competition along with John Hetlinger, instead of Sos and Victoria Petrosyan. 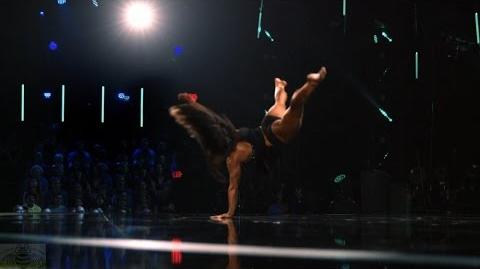