Vegas Round
Omega Force Strength Team was a strength team act from Season 8 of America's Got Talent. They were likely eliminated in the Vegas Round.

The Omega Force Strength Team is a group of Christian-oriented men and women who perform feats of strength. They use their attention-grabbing performances to demonstrate God's mercy, help, strength and love. Their actions show how God's influence in lives can make the seemingly impossible, possible. By encouraging each other throughout the performance, they show that working together and with God, amazing things can happen.

Using these varying athletic and Christian backgrounds as a platform, The Team motivates, inspires and encourages their audiences to realize that God is part of the everyday. These Christian strongmen, some weighing over 300 lbs, can smash walls of concrete with their fists, elbows, and foreheads. They bend steel bars in their teeth, lift huge logs (some weighing over 900 lbs), burst hot water bottles, snap baseball bats like twigs, rip 1500 page phone books in half, tear license plates, break stacks of concrete bricks in one effort, and many other feats of strength. 1

Omega Force Strength Team's audition in Episode 803 consisted of the oldest member of the team (the world's strongest senior citizen) performing a 300-pound barrel squat, another member slamming his elbow through 42 walls of concrete, and the last member bench-pressing Nick Cannon quickly. Although Howie Mandel voted "No" (claiming that although he was entertained, the presentation was unexciting), Howard Stern, Heidi Klum, and Mel B voted "Yes," sending the team to the Vegas Round. 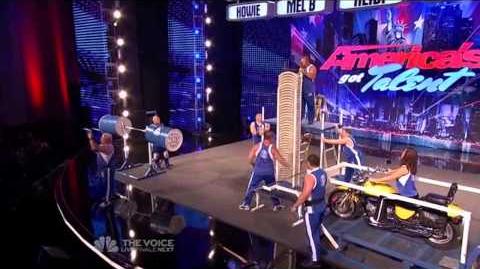 It is unknown whether or not Omega Force Strength Team was present during the Vegas Round as they were never seen, but even if they were, they did not advance to the Quarterfinals.