America's Got Talent Wiki
Register
Don't have an account?
Sign In
Advertisement
in: Acts, Accepted Acts, Vocal Groups,
and 3 more

Not to be confused with One Voice Children's Choir

Judge Cuts
OneVoice was an a cappella group act from Season 11 of America's Got Talent. They were eliminated in the Judge Cuts.

All the members of OneVoice attend Briarcrest Christian High School in Memphis, Tennessee. Under the direction of J.D. Frizzell, OneVoice has quickly become a leader in the contemporary a cappella movement. Performing popular music of many styles, OneVoice has collaborated with multiple GRAMMY winners, including New York Voices and Ben Bram. They have performed on The Sing-Off Live! Tour and hosted the National A Cappella Convention. In 2014, OneVoice became SONY Recording Artists with “Elvis A Cappella” alongside two groups from The Sing-Off: The AcoUstiKats from Season 4 and The Melodores, Season 5 champions. They won the Macy’s All-School A Cappella Challenge judged by #1 Billboard artists Pentatonix.

Their albums, produced by Dave Sperandio of diovoce studios and Robert Dietz of Human-Feedback, have won accolades and entertained fans worldwide. They can be found on iTunes, Loudr, Spotify, and Pandora. OneVoice’s recordings have been selected for SING 11:One Louder, SING 12:This Big, Voices Only, Come Together, WACA, and Best of High School A Cappella compilations. Additionally, their albums “Drive All Night and” and “Starry Eyed” were chosen as Recorded A Cappella Review Board “Picks of the Year” “Drive All Night” received Contemporary A Cappella Recording Awards for Best High School Solo and Best High School Album. [1]

OneVoice's audition in Episode 1103 consisted of singing Rozzi Crane's "Half The Man" as a group. Howie Mandel, Mel B, Heidi Klum, and Simon Cowell all voted "Yes," sending the group to the Judge Cuts. After the performance, one of the performers, Jeremy, asked another member to prom, and she accepted. 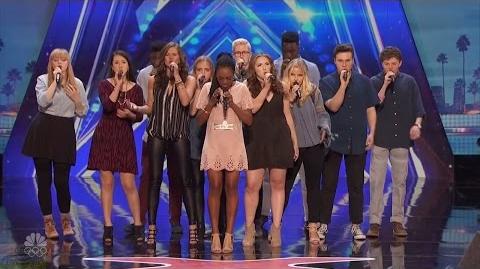 OneVoice's Judge Cuts performance in Episode 1108 consisted of singing as a group a song about waiting for a moment all their lives. OneVoice's performance was not strong enough for the judges to send it to the Quarterfinals, eliminating the group from the competition along with Cecile & Mighty. 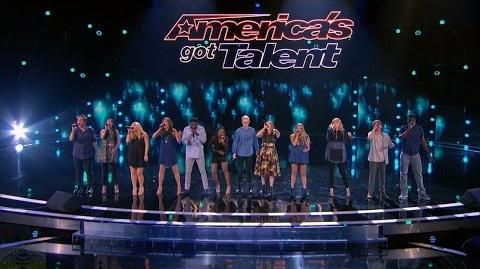 Katherine Ann (KK) Mohler, one of the group’s members, later competed on The Voice Season 21 as a member of Ariana Grande’s team but was eliminated in the Knockout Rounds.