America's Got Talent Wiki
Register
Don't have an account?
Sign In
Advertisement
in: Acts, Accepted Acts, Animal Acts,
and 7 more

Judge Cuts
Oscar and Pam was a singing dog and pianist act from Season 13 of America's Got Talent. They were eliminated in the Judge Cuts.

According to Pam, Oscar can sing when she plays the piano, he can hold a note, and even do a vibrato. Oscar started singing a year and a half prior to the audition in Pam's living room while she was playing the piano, and they have been working together ever since.

Oscar and Pam's audition in Episode 1306 consisted of Pam playing Johann Pachelbel's "Canon in D" on the piano while Oscar the dog "sang" along to it. Although Heidi Klum voted "No", Howie Mandel, Mel B, and Simon Cowell voted "Yes", sending the pair to the Judge Cuts. 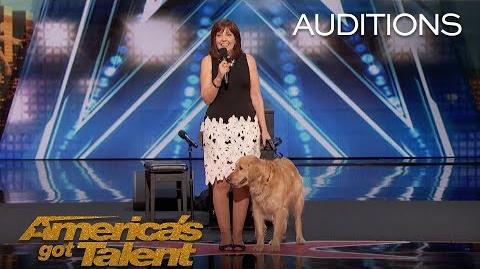 Oscar and Pam's Judge Cuts performance in Episode 1307 consisted of playing the piano and howling "singing" a song. Mel B buzzed the act. Their performance was not strong enough to advance to the Quarterfinals, eliminating them from the competition along with Lilly Wilker and Patches.