Semifinalist
PBM was a band act from Season 1 of America's Got Talent. It was eliminated without performing in the Semifinals.

Started by singer/songwriter/guitarist Nate Castle and trumpet player Tom Torrento, PBM (Poor Boy Music) began its journey inside the halls of Cousino High School in Warren, MI. With each and every show, the band started to gain local recognition with their quirky, horn-infused rock and unmistakable vocal harmonies—not to mention their hard work ethic. Over the years, PBM has gained worldwide acclaim (RawFish Records, LittleGiants Records, Honey Records, etc.) and has had their music distributed in Germany, England, and France.

Their misadventures with love and life, breakups and hang-ups, politics, daydreams and days and nights hanging out at the local Coffee Beanery inspired PBM to take a break from touring and record their latest album. OSAT was released in January at the Royal Oak Music Theatre to over 700 people! In 2006, PBM signed a national distribution deal (Red Eye) putting OSAT in stores across the country.

From the stages of the Vans Warped Tour to the smoky pubs in England to the soundstages of Paramount Studios, PBM has rocked audiences all over the world and continues to tour nationally, month in and month out. Their shows are intense, fun, sweaty and guaranteed to get you up and moving. “This has been an incredible ride, with plenty of ups and downs, but we’re not done yet…we’re not satisfied,” says Castle. “We’re going to continue to work hard, to hit the road, to connect with fans in every town and to spread our kind of music to as many people who are willing to listen.” Trying to maintain a close relationship with their fans is extremely important for Nate, Tom and Miah. They all agree: “Without the support of our family, friends and fans, we’d be nothing.” [1]

PBM's audition in Episode 102 consisted of performing a ska-punk song about a man's broken heart after a girlfriend left him. Piers Morgan buzzed the act. Although Piers voted "No," Brandy Norwood and Brandy Norwood both voted "Yes", sending PBM to the Semifinals. 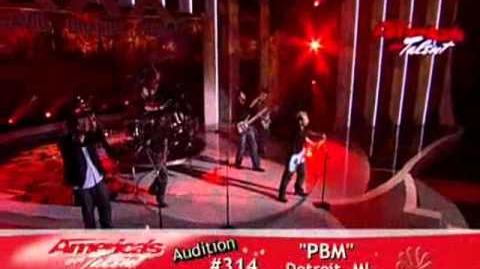 PBM was one of five acts eliminated by the judges from the competition in Week 2 of the Semifinals without performing in Episode 106.