Patches was a rapper act from Season 13 of America's Got Talent.  He was eliminated in the Judge Cuts.

Patches' real name is Maddoc Johnson. He is from Portsmouth, New Hampshire, and is part of a number of different clubs in school, such as the chess club, the school musical, and the electronics club. He also does fencing, judo, wrestling, and sailing.

He got his nickname in first grade, when he got a fleece jacket that would have a patch sewn onto it whenever he took up something new.

Patches' audition in Episode 1306 consisted of rapping an original song, which he says is about the essence of performing. Howie Mandel, Mel B, Heidi Klum, and Simon Cowell all voted "Yes", sending him to the Judge Cuts. 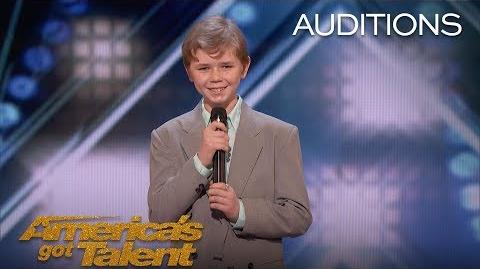 Patches' Judge Cuts performance in Episode 1307 consisted of rapping his own original song called Lickety Split. His performance was not strong enough for the judges to send him to the Quarterfinals, eliminating him from the competition along with Oscar and Pam and Lilly Wilker.

Retrieved from "https://agt.fandom.com/wiki/Patches?oldid=139999"
Community content is available under CC-BY-SA unless otherwise noted.