Judge Cuts
Patrick Bertoletti was an extreme eater act from Season 10 of America's Got Talent. He was eliminated before the Judge Cuts.

Not everyone can brag about eating 275 Jalapeño Peppers in 10 minutes, or a 6.9 pound turkey in just 8, but "Deep Dish" can. Patrick "Deep Dish" Bertoletti is a competitive eater from an Italian family in Chicago. He is ranked #2 in the world of competitive eating. Besides his many titles and challenges, Bertoletti holds the Guinness World Record for 13.5 oz ice cream in 30 seconds and 3 Mars bars in 1 minute. He is known for wearing headphones during competitions. [1]

Patrick Bertoletti's audition in Episode 1007 consisted of drinking 120 raw eggs which had been cracked by the judges and Nick Cannon. Although Heidi Klum voted "No," Howard Stern, Mel B, and Howie Mandel voted "Yes," sending Patrick to the Judge Cuts round. 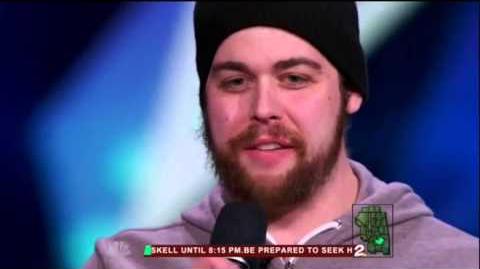 Patrick Bertoletti did not perform in the Judge Cuts round, meaning he either withdrew or was cut by the judges before this stage of the competition.

Patrick participated in an eating competition against a bear on the Nickelodeon show Unleashed in 2020 in which he lost to the bear.