Paul Thomas Mitchell was a singer and guitarist act from Season 8 of America's Got Talent. He was eliminated in the Vegas Round.

Paul Thomas Mitchell is from Memphis, Tennessee. When he was little, he taught himself how to play guitar as an escape from real life. Both of his parents were alcoholics. His mother was a drug addict. His mother left his family. His father ignored and did not support Paul as he continued drinking alcohol.

His father eventually took up Alcoholics Anonymous classes and became better. They began spending more time with each other, and Paul now looks up to his father as a supportive and loving one. He sings and plays guitar to give back to his father.

Paul Thomas Mitchell's audition in Episode 802 consisted of singing "My Life," an original song he composed to thank his father for staying with him. Howard Stern, Heidi Klum, Mel B, and Howie Mandel all voted "Yes," sending Paul to the Vegas Round. 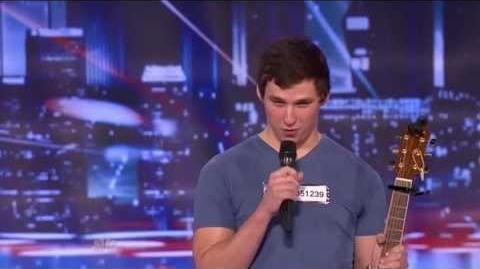 Paul Thomas Mitchell was sorted into the "Male Singers" category in the Vegas Round. His performance in Episode 809 consisted of singing Maroon 5's "Sunday Morning." Paul's audition was not strong enough for the judges to send him to the Quarterfinals, eliminating him from the competition along with Travis Pratt in the same episode. 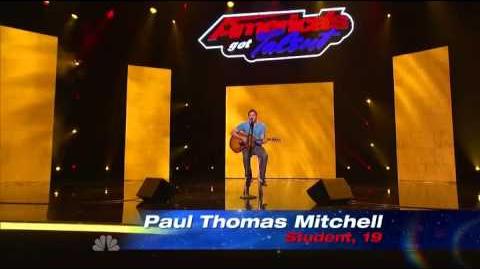 Retrieved from "https://agt.fandom.com/wiki/Paul_Thomas_Mitchell?oldid=77086"
Community content is available under CC-BY-SA unless otherwise noted.