Vegas Round
Paul West & Tucker were a dog act from Season 3 of America's Got Talent. The duo was possibly eliminated in the Vegas Round.

Paul West & Tucker's audition in Episode 303 consisted of Paul throwing a number of frisbees to Tucker, who caught them in ways such as standing on its two hind legs and while doing backflips. David Hasselhoff accidentally buzzed the act, but he, Sharon Osbourne, and Piers Morgan all voted "Yes", sending the duo to the Vegas Round. 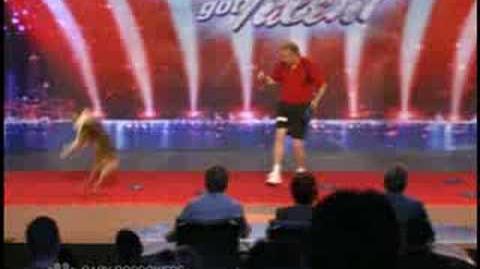 It is unknown whether or not Paul West & Tucker were present during the Vegas Round as they were never seen, but even if they were, they did not advance to the Quarterfinals.