Judge Cuts
Pitch Slapped was an a cappella group act from Season 10 of America's Got Talent. They were eliminated before the Judge Cuts.

Pitch Slapped is the premier coed a cappella group representing Berklee College of Music in Boston, MA. Founded in 2006, Pitch Slapped has enjoyed a rapid climb to fame, appearing on NBC’s The Sing Off in 2010, followed by being crowned the 2011 International Collegiate Champions at Lincoln Center in New York City. Their repertoire consists of a variety of styles, ranging from pop, to rock, to R&B.

Since first competing in 2008, Pitch Slapped has earned the title of ICCA (International Competition of Collegiate A Cappella) Quarterfinal champion, each subsequent year. In 2010 Pitch Slapped earned the ICCA finals "1st Runner Up" title at Lincoln Center in New York City. They returned to the competition in 2011 and were crowned ICCA champions. ﻿ Pitch Slapped was a featured group on NBC's "The Sing Off" in December of 2010. In November of 2011 the group traveled to North Carolina, where their debut performance at the SoJam a cappella festival won them first place.

Pitch Slapped's audition in Episode 1003 consisted of singing Nick Jonas "Jealous" as a group. Althought Howie Mandel voted "no". Howard Stern, Heidi Klum, and Mel B voted "Yes," sending the group to the Judge Cuts round. 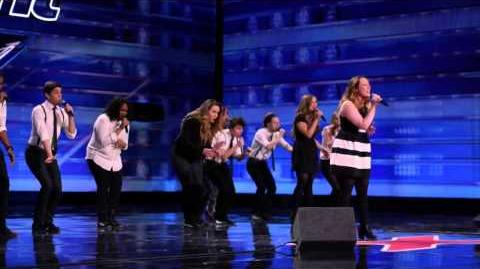 Pitch Slapped did not perform in the Judge Cuts round, meaning they either withdrew or were cut by the judges before this stage of the competition.