America's Got Talent Wiki
Register
Don't have an account?
Sign In
Advertisement
in: Acts, Season 9 Acts, Accepted Acts,
and 3 more

Psycho Jack was a magician act from Season 9 of America's Got Talent. He was eliminated during Judgment Week.

Psycho Jack is the self-proclaimed "Wizard of Comedy." He combines comedy and magic, along with his most unusual look, to create an evening of unique madness. He describes his act as Robin Williams, Penn & Teller, David Copperfield and Cirque Du Soleil all rolled into one complete package. 1

Psycho Jack's audition was televised in a "Best of the Auditions" episode aired on July 15, 2014, but not in a regular audition episode. The audition consisted of placing himself in a box which levitated by itself. At least three judges voted "Yes", sending Jack to Judgment Week.

Psycho Jack was sorted into the "Magicians" category in Judgment Week. His performance in Episode 907 consisted of creating the illusion of cutting an assistant in half in a box, separating the halves, and then re-uniting the halves into a whole body. Unfortunately, Jack had problems slotting his saws into the box and re-connecting the halves of the box. Because the judges felt his mistakes were too noticeable and his presentation was off, Jack was immediately eliminated from the competition. 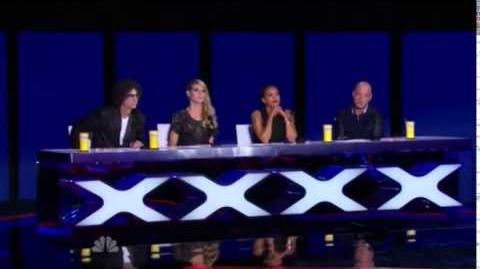