America's Got Talent Wiki
Register
Don't have an account?
Sign In
Advertisement
in: Acts, Novelty Acts, Season 13 Acts,
and 6 more

Withdrew
Rénald Zapata was a painter act from Season 13 of America's Got Talent. He withdrew before the judge cuts.

The painter performer Rénald Zapata presents his works to the public since 1993.

In the studio, in the street ( street art ) or on stage ( live-painting shows ), his paintings take us on a journey to a world of music, dance and poetry.

Rénald Zapata's audition in Episode 1303 consisted of maneuvering a puppet to paint a portrait of Simon Cowell. On his youtube channel Renald confirmed that Howie Mandel, Mel B, Heidi Klum, and Simon Cowell all voted "Yes, sending Renald to the judge cuts

According to his Youtube channel. Renald Zapata withdrew from the competition because of personal reasons.[2] 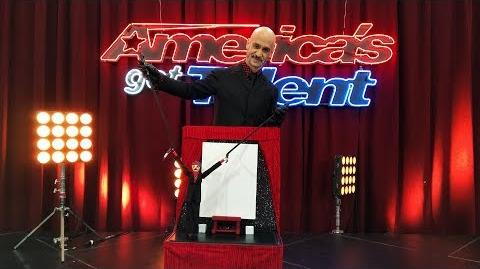