America's Got Talent Wiki
Register
Don't have an account?
Sign In
Advertisement
in: Acts, Animal Acts, Rejected Acts,
and 4 more

None
Rascal the Ugliest Dog was a dog act from Season 10 of America's Got Talent. It was eliminated in the audition round.

Rascal has re-beat his own record again by winning more ugly dog contests than any dog in history, with 11 first place wins. Rascal placed in every different ugly dog contest ever entered, some winning 1st a second year in a row. Rascal started big, winning The 2002 World’s Ugliest Dog contest, now he’s its “Ring of Champions” title holder.

Dane and Rascal were named “Distinguished Residents” at The Mayor’s State of the City, and have a Star on the “Walk of Fame” in Palm Springs. California.

Rascal is Ugly Dog Royalty, from a 4 dog dynasty of winning ugly, with his Mom, Mai Tai, and Grandmother, Lady Pink, both 3 time World title holders and Rescued Grandfather Chi Chi, is in the Guinness Book of World Records for winning 8 World’s Ugliest Titles, being #81 of 100 Guinness all time moments on NBC.

Master Dane Andrew has set his own record showing Ugly Dogs for 33 years straight. Rascal is so ugly, he was on the Jay Leno’s Tonight Show before he even entered a contest, interviewed by Barbara Walters on The View, Jane Pauley show, Carson Daly, 5 Animal Planet shows, Kathy Griffin’s D-List, Rachael Ray, 2 ET’s Insiders, People, OK, In Touch, Star, Perez Hilton and numerous other International TV & magazines, cast in 5 horror movies, inc: Tele-Zombie & Curse of the Smoke O’ Lantern, Carma, The Profile, Celebrity filled documentary “The Ugliest Dog” and a cartoon strip by the same name. Rascal even has a Christmas music video singing Silent Night.

Rascal, who lives with rescue kitties twice his size, spreads his message through his notoriety for people to spay, neuter, adopt instead of breading and donate to their local shelter. Soon out is his patented trademark Hotdog Leash line to help raise funds for animal rescue. [1]

Rascal the Ugliest Dog's audition in Episode 1005 consisted of performing the "first-ever doggy strip show", which included Rascal's owner removing articles of clothing one by one off the dog. Howard Stern, Heidi Klum, Mel B, and Howie Mandel all buzzed the act. All four judges voted "No," eliminating Rascal from the competition. 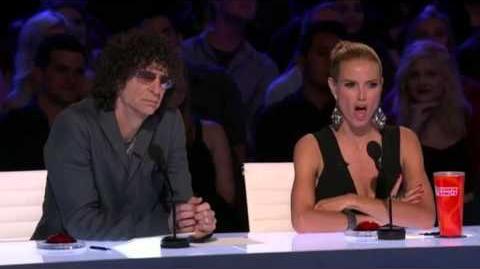