Judgment Week
Ray Jessel was a comedy singer and pianist act from Season 9 of America's Got Talent. He was possibly eliminated in Judgment Week.

Born in 1929, Ray Jessel hails from Cardiff, where he received his music degree from the University of Wales. He won a scholarship to study composition for a year in Paris as a graduate student with Arthur Honegger.

He emigrated to Canada, where he began his career as an orchestrator/composer for CBC radio and television. His first work for the musical theatre was for the annual Canadian satirical revue SPRING THAW, where he struck up a collaboration with Marian Grudeff. This led to their writing material for Julius Mond's UPSTAIRS AT THE DOWNSTAIRS revues in New York and brought them to the notice of Broadway producer Alexander H. Cohen, who hired them to write songs for his Sherlock Holmes musical BAKER STREET (1965). The song "A Married Man," sung in the show by Dr. Watson, became a hit recording by Richard Burton.

The team subsequently wrote the score for a revival by Cohen of HELLZAPOPPIN, directed by George Abbott, which played at the Montreal Expo '67. The show did not come to New York, but the title song was recorded by both Jimmy Durante and Louis Armstrong. The Armstrong recording is available on the CD, "What A Wonderful World" (Louis Armstrong, MCA Records 1988).

With the closure of HELLZAPOPPIN, Jessel sought greener pastures in Hollywood, where he has had a successful career in television, writing first musical material then comedy sketches for "The Dean Martin Show," "The Carol Burnett Show," many John Denver specials, and a long stint with "The Love Boat." Among many other episodes he wrote the two-hour movie, LOVE BOAT - THE MUSICAL starring Ethel Merman, Carol Channing, Ann Miller, Van Johnson, Cab Calloway and Della Reese. Jessel was also writer/producer of the long-running series "Head of the Class."

Ray Jessel returned to Broadway in 1979, being chosen by Richard Rodgers to write additional lyrics for I REMEMBER MAMA. He wrote the lyrics to four songs in the show including "A Little Bit More" — the last song Richard Rodgers was to write for the musical stage.

With his current partner Cynthia Thompson, Jessel wrote the song "Whatever Happened To Melody?" It was recorded by Michael Feinstein, on his CD "Forever" and has since been recorded by David Campbell on his CD "Yesterday Is Now" (Phillips/Polygram 1996) and by Masters Of Harmony on their CD, "California Gold Rush" (1996). Another recent Jessel/Thompson recording is their song "I'm All Right Now" on John Pizzarelli's CD "New Standards."

Among their recent work-in-progress is a musical version of Daniel Defoe's MOLL FLANDERS, from which the ballad "Please, Don't Let It Be Love" was nominated for best song at the recent International Musical of the Year Contest (1996) and is available on CD "Best Songs" on Columbus Records, with Al Jarreau.The team also wrote scripts and songs for the Shari Lewis PBS show "The Charlie Horse Music Pizza".

Michael Feinstein calls Ray Jessel "the millennium Noel Coward," and Jessel made his debut (at 72!) as a Cabaret performer at Hollywood's Gardenia room in April, 2002. He has since played to a series of sell-out performances there, at LA's famed Jazz Bakery and Toronto's Top o' the Senator, in New York at Danny's Skylight Room and at Don't Tell Mama. Jessel was a featured star in the Mabel Mercer Foundation's prestigious Cabaret Convention in Palm Springs and, most recently, at New York's Town Hall. [1]

Ray Jessel's audition in Episode 906 consisted of playing the piano to and singing his original comedy song ""What She's Got - The Penis Song." Howard Stern, Heidi Klum, Mel B, and Howie Mandel all voted "Yes," sending Ray to Judgment Week. 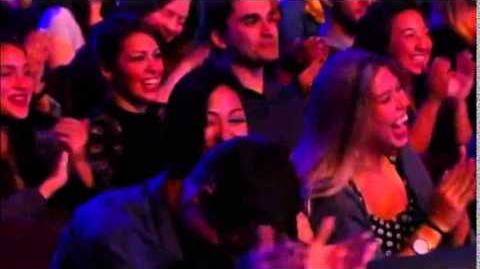 It is unknown whether or not Ray Jessel was present during Judgment Week as he was never seen, but even if he was, he did not advance to the Quarterfinals.