America's Got Talent Wiki
Register
Don't have an account?
Sign In
Advertisement
in: Acts, Dance Groups, Rejected Acts,
and 3 more

Auditions
Rock Hard Revue was a dance group from Season 9 of America's Got Talent. It was eliminated in the audition round.

Rock Hard Revue's 90 minute, fully costumed and choreographed production show is sure to have women jumping out of their seats and wanting more as these hard bodied performers live out every woman’s fantasy on stage. A must see for “girls night’, birthday’s, or bachelorette parties. The show is directed and choreographed by David Greenhouse, former Director/Choreographer of “Chippendales” in Las Vegas and choreographer of Joe Manganiello’s ‘La Bare‘. Live vocals and audience participation bring the show to life. 1

Rock Hard Revue's audition in Episode 905 consisted of dancing and stripping to Chris Brown's "Turn Up the Music." After the performance, Howie Mandel took off his shirt and joined the group onstage. Although Heidi Klum and Mel B voted "Yes", Howard Stern and Howie voted "No", eliminating the group from the competition. 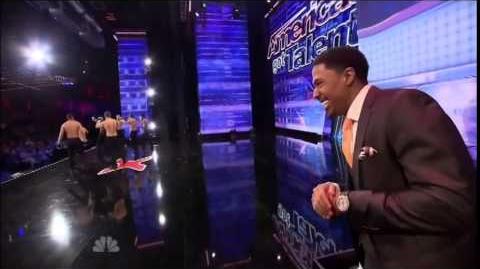