Rory Freeman was a dancer act from Season 11 of America's Got Talent. He was eliminated in the Judge Cuts.

Rory Freeman is from Pawtucket, Rhode Island. He has performed in pieces by Bill T. Jones, Paul Taylor, Bella Lewitsky, and Luca Veggetti and performed globally as a member of MOMIX. He worked with Commonality, Escape Artists, Royal Flux, and with Earth, Wind, & Fire, Taylor Swift, Paula Abdul and Jack Wagner. He worked on portions of “The 2014 Winter Olympics Opening Ceremonies”. He is faculty and judge for national conventions and competitions and teaches at studios across the U.S. Rory is also the Co-Founder of Move: The Initiative, a weekend dance intensive in his home state of Rhode Island. Rory joined Shaping Sound in 2013 and toured with them last year, and performed at the International Festival Danse Encore, Dizzy Feet Gala and Dancer Palooza. [1]

Rory Freeman's audition was never televised. It is unknown whether or not he was buzzed, but at least three judges voted "Yes," sending Rory to the Judge Cuts round.

Rory Freeman's Judge Cuts performance in Episode 1107 consisted of dancing and leaping in the air. Rory's performance was not strong enough for the judges to send him to the Quarterfinals, eliminating him from the competition. 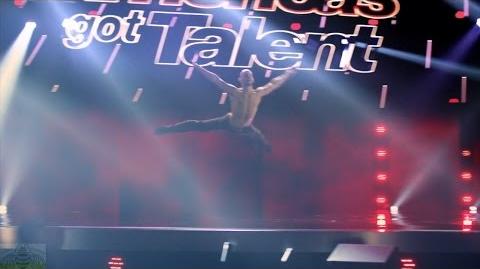 Retrieved from "https://agt.fandom.com/wiki/Rory_Freeman?oldid=68429"
Community content is available under CC-BY-SA unless otherwise noted.