America's Got Talent Wiki
Register
Don't have an account?
Sign In
Advertisement
in: Acts, Rejected Acts, Novelty Acts,
and 3 more

None
Sam Amos was a rumpologist act from Season 11 of America's Got Talent. She was eliminated in the audition round.

Sam Amos is a psychic clairvoyant with a range of skills that have been used over the years to communicate information to anyone that is coming around her for that purpose. Sam has a strong belief in the information she receives and passes it on without dressing it up. She also has an internal drive that embraces the media coverage that is starting to become a way of life.

Sam taught herself to read tarot cards about 25 years ago using a full deck of cards and her own methods. She then developed clairvoyance about nine years ago picking up information for her clients from thoughts, images and feelings that were distinct from those she could recognise as her own.

Sam has a number of private clients who come to her regularly for readings. Some purely for the entertainment value whereas others needing the comfort and security the slight insight into their future brings to help them through a difficult time. These readings are generally given from tarot card readings however she also reads; feathers, crystals, palms and more recently, as it has become the focus of the media attention, bottoms! All these methods are coupled with her psychic clairvoyance and act mainly as a focal point and direction for the reading.

The media often ask Sam to demonstrate bottoms readings. She approached this method of reading in 2000 when asked at a party if tarot cards were the only thing she did; at the time she pointed out that a reading could be done from anything and proceeded to demonstrate using someone's bottom. It was Neil Bentley on Galaxy radio that brought this method back to the forefront on his show in September 2000. This led to the current media curiosity into what it is all about; and the odd comical quips made by such people as Lilly Savage, and also Johnny Vaughn on Big Breakfast Pun of the day. [1]

Sam Amos's audition in Episode 1106 consisted of making predictions about somebody (later revealed to be Nick Cannon) by observing just their butt. Heidi Klum and Simon Cowell voted "No", eliminating Sam from the competition. 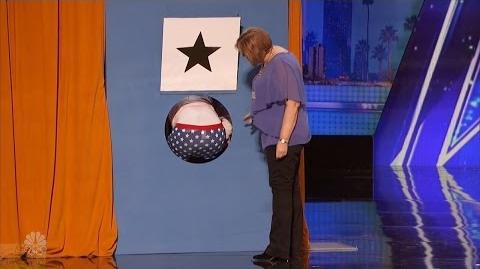