America's Got Talent Wiki
Register
Don't have an account?
Sign In
Advertisement
in: Acts, Contortionists, Novelty Acts,
and 5 more

None
Scott Churchson was a hand/face contortionist act from Season 10 of America's Got Talent. He was eliminated in the audition round.

Once a mild-Mannered financial adviser for a large financial firm, Scott Churchson turned his attention to acting and entertaining in April 2010. Since then he has popped up in over 150 projects between principal, stunt work, stage, voice overs & BG. He's performed on in front of 700 people on stage and used his extensive martial arts training for fight scenes for projects such as Batman: The Dark Knight Rises. Boardwalk Empire & others.

His Youtube video "Two Finger Contortion Tricks You Can't Do" have accumulated over 840,000 views since it's inception in August 2012. [1]

Scott Churchson's audition in Episode 1007 consisted of moving his hands in a wavelike motion, moving his ears, and bending his ring fingers and pinky fingers 90 degrees against the rest of his hands, all to The Champs' "Tequila." Howard Stern and Howie Mandel  buzzed the act. Howard, Heidi Klum, Mel B, and Howie all voted "No," eliminating Scott from the competition. 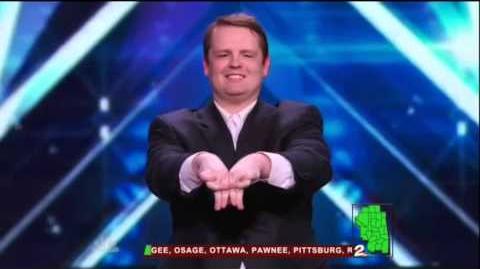