Semifinalist
Sean and John were a tap dancer duo act from Season 1 of America's Got Talent. They were eliminated in the Semifinals.

Tapping twins, Sean and John Scott, step into today’s fast-paced dance industry and revolutionize tap through a unique fusion of past traditional dance routines and modern hip hop. Having trained with professional tap master and innovator, Alfred Desio since the age of 6, the identical twins earned big performance breaks on television shows including NBC’s American Dreams, The Tonight Show, and 30 Seconds to Fame. They have also have performed at the MTV Video Music Awards alongside Christina Aguilera, and hip hop mogul, Nelly, of the CW’s The Next. Word of the brothers has also reached the ears of celebrities like Prince, Usher, Stevie Wonder, and Beyonce, wherein the duo take on different frames of tap dancing from jazz and hip-hop, to Broadway.

The twin brothers rose out of their humble beginnings at The Colburn School of Performing Arts, as they began to explore, master, and revamp different interpretations of tap dancing by blending quick footwork with a punch of attitude. Mirroring not only the physical appearance of the other, the Scott boys possess an extraordinary amount of dance chemistry that explodes into electrifying performances. With their appearances on Disney’s hit television show, Shake It Up and Nickelodeon’s Yo Gabba Gabba, Sean and John prove to be entertainers with an X-factor and overflowing passion for their craft.

From performing in charity events at schools and churches, to doubling as creative masterminds for Usher’s tap dance routine in the “Movie Rocks Awards”, the tapping twins have successfully reclaimed the soul of tap dancing and are looking to recreate new symphonies of music paired with harmonies from their soles. Sean and John have also competed and emerged as finalists in contests such as Azteca’s Quien Tiene Estrella.

Sean and John's audition in Episode 101 was never televised. It is unknown whether or not they were buzzed, but at least two judges voted "Yes," sending the duo to the Semifinals.

Sean and John's Week 4 Semifinals performance in Episode 110 consisted of tap dancing as a duo. Piers Morgan, Brandy Norwood, and David Hasselhoff all gave the duo "✓" votes. Sean and John did not receive enough votes to finish in at least second place in America's Vote, eliminating them from the competition in Episode 111 instead of Celtic Spring and David & Dania - Quick Change. 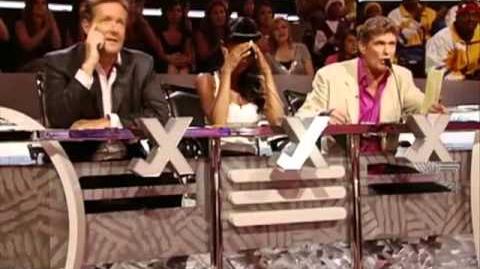