Auditions
Sean and Lindsay were a comedy duo from Season 13 of America's Got Talent. They were eliminated in the audition round.

Sean and Lindsay are a married stand­-up comedy duo from the northern suburbs of Chicago. They recently appeared on Season 13 of AGT.

They met and fell in love way back in 2002 when they were cast as the leads in their 8th grade play “The Ice Wolf” (don’t bother looking it up, it wasn’t very good). Jump forward over a decade later and Sean finally got the guts to begin his comedy journey solo.

Although he was the only one talking, he would always refer to his lovely wife Lindsay, eventually bringing her onstage with him. This came off a bit one­-sided and after a while Lindsay got sick of standing there like a human prop and she began to interject her side of things into his act.

Eventually they became equal partners with two different perspectives and delivery. This created a very different kind of flavor. They are basically the pineapple pizza of comedy: odd, yet delicious... that is, if you like pineapple on pizza...if not then they are totally like the stuff you are into... [1]

Sean and Lindsay's audition in Episode 1302 consisted of performing a self-deprecative stand-up comedy routine about their relationship. Simon Cowell buzzed the act. Agreeing that the routine was more uncomfortable and less funny, Howie Mandel, Mel B, Heidi Klum, and Simon all voted "No", eliminating Sean and Lindsay from the competition. 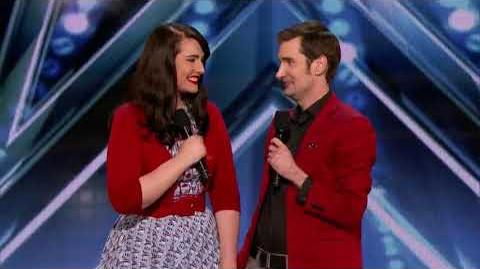