America's Got Talent Wiki
Register
Don't have an account?
Sign In
Advertisement
in: Acts, Male Singers, Rejected Acts,
and 4 more

None
Septimius the Great was a singer act from Season 10 of America's Got Talent. He was eliminated in the audition round.

Septimius the Great, a Maryland based dance artist, is a Multi-Award Winning Entertainer and Creative innovator. Known around the globe for his dance music in domestically and abroad, he has worked with some of the industry’s biggest names including Fantasia, Chrisette Michele, Lil Kim, Lil Mo, Pat Benetar, Patti Labelle, Crystal Waters, and Ultra Nate’ just to name a few.

His recent chart topping recording, “Who's The Sexiest" earned him the International Music Award for Best Male Vocalist. Also in his song "I Am Fashion” garnered a nomination for “Best Dance Song” by the Hollywood Music in Media Awards. Most recently he has also been nominated for Best Music Artist by the Baltimore Music Awards and the RAW Music Awards. In addition to his music career, Septimius the Great is very active in front of and behind the camera. To date he’s produced four award worthy videos for his songs “Exotic Pleasure”, “I Am Fashion”, “Who’s the Sexiest”, and “When in Rome”. These songs and videos present the perfect fusion of dance music, fashion, and cultures.

Septimius the Great has performed in front of audiences in small lounges to large stadiums. In 2010, he launched his new music EP project called “The New Rome”. The first EP single “I Am Fashion” was released digitally all over world gaining huge recognition. “I Am Fashion” gained notoriety in Germany for his new creation of sound in dance music. In January 2013, he began to release singles from his upcoming Debut CD “To Be Emperor” which has been well-received both domestically and internationally. The CD includes the original songs “Exotic Pleasure”, “Who’s the Sexiest”, “Command U 2 Dance” and the re-release of “I Am Fashion (remix)”. He is currently being featured on several TV Shows, Radio Stations and Magazines worldwide.

Septimius began as a performing artist in 1997 and that was when the former runway model realized his passion for music and singing. He soon started his recording career as a featured artist with the X9 records recording label, which led to a debut CD single with a local group (M.O.R.), which topped the dance music charts worldwide. He is currently being featured on several TV shows (Keeping it Real..) , radio stations (KISS FM, HOT 97..), and magazines (Swerv, V-Rag - Canada, Don Diva Magazine…) worldwide. A conscientious performer, Septimius believes that it is important to inspire our youth. Stressing education, he constantly teaches the importance of fairness and honest and provides a worthwhile competitive opportunity through his Mr. and Miss International Pageant. [1]

Septimius the Great's audition in Episode 1007 consisted of singing an original song titled "I am Fashion." Howard Stern, Heidi Klum, Mel B, and Howie Mandel all buzzed the act. All four judges voted "No," eliminating Septimius from the competition. 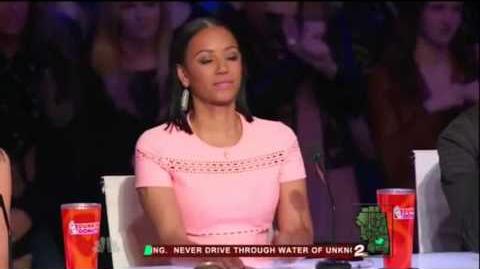