America's Got Talent Wiki
Register
Don't have an account?
Sign In
Advertisement
in: Acts, Novelty Acts, Rejected Acts,
and 22 more

Seth Allison grew up in a large Texas family in a small Texas town. He graduated from Pepperdine University with a B.A. in Media Production, accompanied by an emphasis in acting. Seth was the executive producer of "The Randumb Show," a sketch comedy program broadcast on local Malibu station 32. He's currently producing video content for various comedy channels including his YouTube which has over 20 million views. Seth resides in Hollywood California where you can catch him live in The Murge with his absurdist comedy troupe from The Idiot Workshop or on one of his improv teams, Interrobang‽ or Soda Jerk. Every last Friday of the month come by Sethward's Show & Tell Screening Spectacular for LA's best pre-released comedy videos. [1]

Even before Sethward began his audition in Episode 1303, the audience was quickly put off by his appearance and mannerisms, booing and jeering for him to get buzzed off. His act consisted of shedding from his caterpillar costume into one of a butterfly, portraying an actual caterpillar's metamorphosis. At the end of the act, unfortunately for Sethward, he "accidentally" exposed himself to the judges and the audience as there was a hole in his stockings. Howie Mandel, Mel B, Heidi Klum, and Simon Cowell all buzzed the act. All four judges voted "No", eliminating him from the competition. 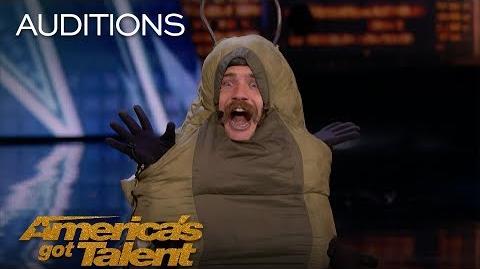 Sethward made several more appearances on The Gong Show in the show's second season in 2018: the June 21 (as a walrus) and July 26 episodes (as a chicken). He was gonged twice: the first by Rita Wilson and the second by Lil Rey Howery. He appeared on the August 23 episode (as a cow) and got 26 points, finishing in second place behind Rose City Circus. He appeared again on the August 30 episode (as a bunny) and was gonged again by Rita Wilson.

Sethward returned for Season 14. His audition in Episode 1403 consisted of first standing on stage dressed in a giraffe costume and telling a story about how he was dropped on his head at birth.   Howie Mandel , Gabrielle Union , Julianne Hough and Simon Cowell all buzzed the act.  While being dragged off the stage by Terry Crews, he then flashed the audience.  Afterwards, he later returned to the stage dressed in a walrus costume in which he played with beach balls and rolled off the stage.  Although Howie and Simon voted "yes," Gabrielle and Julianne voted "no," eliminating Sethward from the competition.

In 2018 & 2019 Sethward auditioned for Italian competition series Tu si que vales however he failed to reach the following round both times. Then he auditioned in Germany's Got Talent. He is also failed.

Sethward returned for Season 16. His audition in Episode 1601 consisted of being a peacock. Heidi Klum and Simon Cowell buzzed the act. However, Howie Mandel, Sofia Vergara, Heidi and Simon all voted "Yes", sending Sethward to the next round.

Sethward was chosen to advance to the Top 36.

Sethward's Quarterfinals performance in Episode 1609 consisted of continuing his peacock act, then turning into a phoenix at the end to Katy Perry's "Peacock" and "Rise". Simon Cowell buzzed the act. He did not receive enough votes to advance to the Semifinals in Episode 1610, eliminating him from the competition along with Canine Stars instead of Gina Brillon.