Judge Cuts
Shannon and Reckon were a dog act from Season 13 of America's Got Talent. They were eliminated in the Judge Cuts.

Shannon Kiley has been training dogs since childhood but her true passion didn't emerge until after college. She received her Bachelor's degree in Biomedical Science from Texas A&M University in 1998 and began working in DNA research. After the Bonfire collapse in 1999 at Texas A&M, Shannon decided she'd like to pursue a dream of hers to train a search dog, a choice that ultimately led to a career change. In January 2000, she joined her first search and rescue (SAR) team in Houston, TX with her Doberman puppy Soleil. Since that time, she has certified six dogs in airscent (area search) and/or human remains detection, earning over 30 certifications, both locally and nationally under the North American Police Work Dog Association (NAPWDA), International Police Work Dog Association (IPWDA), National Narcotic Detector Dog Association (NNDDA) and National Association for Search and Rescue (NASAR). Currently, Shannon is the President and K9 Training Director for the Recovery Dog Network and responds on search missions both locally and internationally. She has also enjoyed competing in AKC and Schutzhund Obedience trials, earning titles with her Dobermans. She currently shares her home with her Dobermans Never, Savor, Terrier mix Logic, Border Collie Whistle, and husband Rob.

Since 2002, Shannon has been training dogs professionally under her company Dobie Detectives Training Academy. She has personally trained hundreds of dogs and owners, who had a multitude of different behavioral issues. Skilled in reading animal behavior, Shannon incorporates psychology into her training techniques using a scientific approach and educates owners not only how to train their dogs, but also the theory behind the methods. She believes in truly educating owners in how to effectively work with their dogs to achieve their desired goals. [1]

Shannon and Reckon's audition in Episode 1304 consisted of Shannon performing various tricks with Reckon including having him jump through hoops, walk on his hind legs behind her, untie Tyra Banks from a chair attached to a stick of dynamite, placing the dynamite in a bucket and then jumping over a post before the dynamite exploded. The verdict was not televised, but, although Mel B voted "No," Howie Mandel, Heidi Klum, and Simon Cowell voted "Yes," sending the duo to the Judge Cuts. 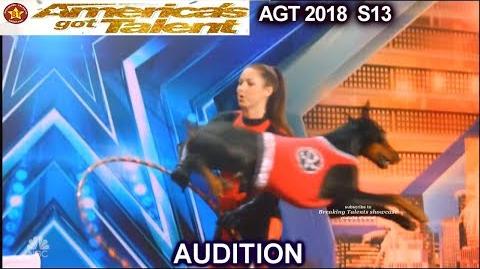 Shannon and Reckon's Judge Cuts performance in Episode 1308 consisted of Shannon performing various tricks with Reckon. Unfortunately, Reckon was not successful in performing the tricks. Their performance was not strong enough to advance to the Quarterfinals, eliminating them from the competition along with EXISDANCE and Vivien Vajda.