Judge Cuts
Shel Higgens, also known as The Grandpa Show, was a stuntman act from Season 10 of America's Got Talent. He was eliminated before Judge Cuts.

Shel Higgens is a former real estate agent. After having had a mid-life crisis, he decided he really wanted to pursue entertainment. He started performing with a 100 foot rope escape that he learned while spending time in Key West, Florida. He was impressed and influenced by all of the performers in Key West's Mallory Sqaure.

After Key West, he was hooked. He learned stunt after stunt and trick after trick. Most of the tools he uses are custom-made. He often barters with fellow performers for tools of the trade. [1]

Shel Higgens' audition in Episode 1005 consisted of walking on his hands near a powered-on chainsaw and then slicing an apple in his mouth in half with the saw while blindfolded. Although Mel B voted "No," Howard Stern, Heidi Klum, and Howie Mandel all voted "Yes," sending Shel to the Judge Cuts round. 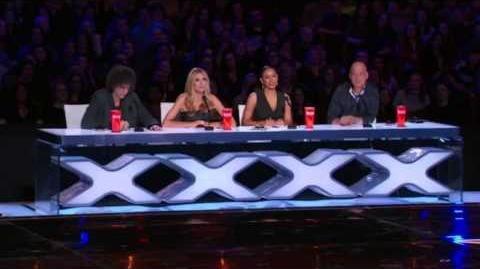 Shel Higgens did not perform in the Judge Cuts round, meaning he either withdrew or was cut by the judges before this stage of the competition.