America's Got Talent Wiki
Register
Don't have an account?
Sign In
Advertisement
in: Acts, "The Champions 2" Guest Performers, Accepted Acts,
and 20 more

Suffering from carpal tunnel syndrome and a career-ending injury to his thumb tendons, Shin Lim had a tough start in his journey through sleight of hand magic. Despite all of this, through painstakingly hard work and perseverance, Shin Lim is now the reigning world FISM champion for close-up magic. A self-proclaimed "sleight of hand artist," Shin Lim admits he is not actually a magician or a wizard, and has no intention of lying to the audience. He performs carefully choreographed routines rather than pretending to defy the laws of physics. Combining dexterity, precision and grace, he has distilled a lifetime of training into a devious display of dancing digits. His mind-blowing finger moves are so masterful that the audience is left to wonder if what their eyes have seen is truly possible. According to both Simon and Howie, Shin Lim is "the BEST close-up magician they have ever seen." [1]

Shin previously appeared on Penn & Teller: Fool Us in seasons 2 and 4, fooling Penn and Teller both times.  His first appearance in the show's second season went viral, with over 50 million views on YouTube.

He has had a multinational upbringing. He was born in Vancouver, Canada, spent much of his childhood in Singapore, lived in Massachusetts, and now resides in Las Vegas with his wife.

Shin Lim's audition in Episode 1301 consisted of performing a cards routine with host Tyra Banks, in which he had her sign a randomly selected card. He then created the illusion of the card appearing on top of a deck of cards, the imprint of a card rubbing onto Shin’s skin as a tattoo, the card vanishing and reappearing in the deck, as well as inside of a sealed envelope, the deck of cards transforming into a deck of clear plastic sheets, then into a glass case with Tyra's card sealed inside, and finally appearing to insert the glass case into the deck’s box and tearing the box, revealing the case had disappeared. Howie Mandel, Mel B, Heidi Klum, and Simon Cowell all voted "Yes," sending Shin to the Judge Cuts. 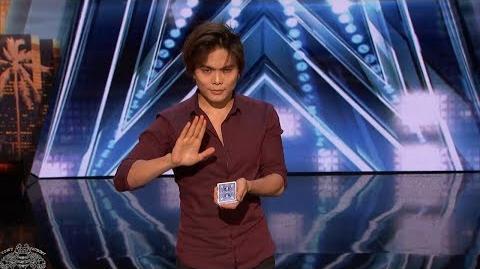 Shin Lim's Judge Cuts performance in Episode 1308 consisted of performing a trick with "Queens" and "Aces" (known as 52 Shades of Red). Shin made the "Aces" vanish, then reappear under guest judge Olivia Munn's hand. Shin then progressed to vanish the remaining queens in various ways. Howie Mandel, Mel B, Heidi Klum, Simon Cowell, and Olivia Munn gave him standing ovations. His performance was strong enough for the judges to send him to the Quarterfinals along with Rob Lake. 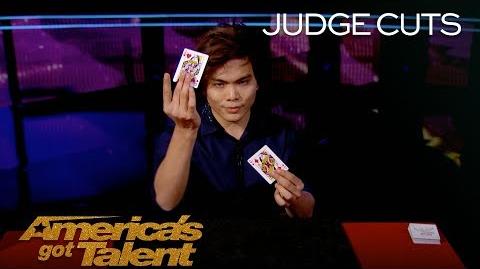 Shin Lim's Week 1 Quarterfinals performance in Episode 1311 consisted of a routine involving fast-moving cards that disappeared and reappeared and even started smoking, changing into a different deck which spelled out "Vote For Shin Lim America’s Got Talent". Howie Mandel, Mel B, Heidi Klum, and Simon Cowell gave him standing ovations. Shin received enough votes to advance to the Semifinals in Episode 1312 instead of Lord Nil. 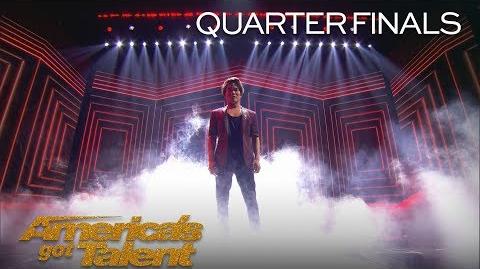 Shin Lim's Week 1 Semifinals performance in Episode 1317 consisted of doing a close-up routine (known as the Dream Act) with assistance from Heidi Klum and Tyra Banks. He had Heidi pick and sign one card, and makes the marker in his hand disappear. He laid it face down and erased the face, then extracted it from his mouth. Tyra also chose and signed a card, making it appear from several different places including his pants, pocket and mouth. Heidi's card in a plastic bag flipped into Tyra's card and back before making it disappear along with the deck box. Howie Mandel, Mel B, and Simon Cowell gave him standing ovations. Shin received enough votes to advance to the Finals in Episode 1318 instead of Us the Duo. 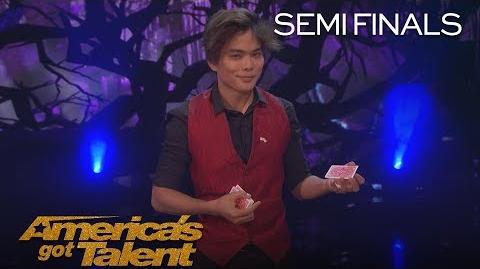 Shin Lim's Finals performance in Episode 1321 consisted of performing a close-up trick with Tyra Banks. He had Tyra roll 2 dice and made 4 cards of the same number appear. Tyra then chose a suit, and he made multiple cards of that chosen suit appear. To the left of the table was a card with a question mark on it, changing the number with mental magic, then made the number and suit appear among floating cards. Howie Mandel, Mel B, Heidi Klum, and Simon Cowell all gave him standing ovations. 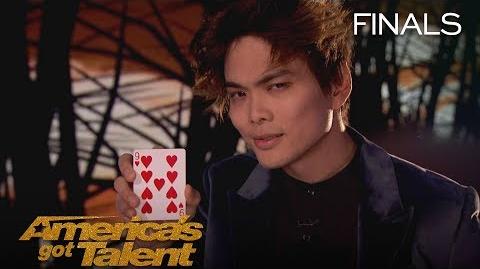 For the finale in Episode 1322, Shin Lim performed a card trick with Tyra Banks and American Ninja Warrior hosts Matt Iseman and Akbar Gbaja-Biamila. He received enough votes to advance to the Top 5 instead of Daniel Emmet. Shin was announced as the winner of Season 13 ahead of Zurcaroh, Brian King Joseph, Samuel J. Comroe and Michael Ketterer, winning $1 million and the headlining of a show in Las Vegas. 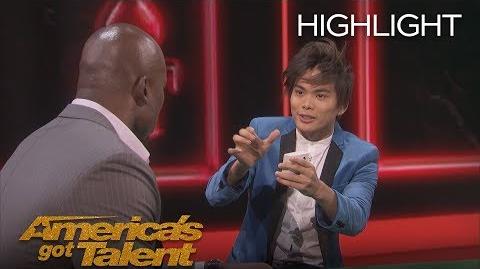 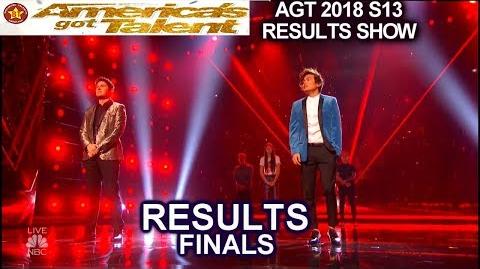 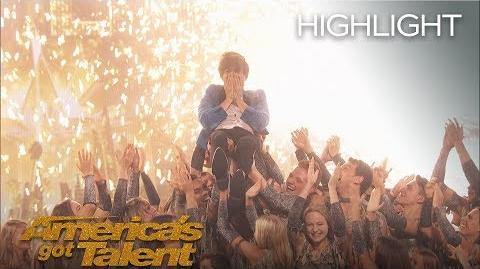 Shin returned for The Champions. His performance in Episode TC05 consisted of performing a card trick with Terry Crews in which he makes cards appear and disappear, and even spelling out the word "Champions". Howie Mandel , Mel B , Heidi Klum and Simon Cowell all gave him standing ovations. It was revealed that the superfans voted Shin into the top 3 along with Attraction and Sons of Serendip. He received more votes than Attraction and Sons of Serendip, sending him to the Final. 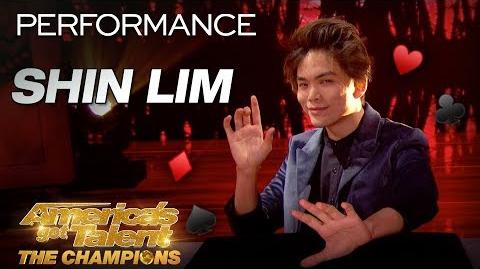 Shin Lim's Finals performance in Episode TC06 consisted of performing a card trick in which he made cards appear and disappear including two cards each selected and signed by Terry Crews and Howie Mandel.  At one point in his performance, he made one of the cards appear as a tattoo on his chest.  Howie, Mel B , Heidi Klum and Simon Cowell all gave him standing ovations.

For the finale in Episode TC07, Shin Lim performed a card trick with Terry Crews' co-star from Brooklyn Nine-Nine, Melissa Fumero. The superfans gave him enough votes to enter the Top 5 along with Kseniya Simonova instead of Deadly Games. Shin won the competition ahead of Darci Lynne, Kseniya Simonova, Cristina Ramos and Preacher Lawson, receiving the honor of Best Talent in the World.

He and Colin perform together in the show "Limitless" at the Mirage in Las Vegas and across the country.