Sideswipe was a martial arts dance group act from Season 1 and Season 2 of America's Got Talent. They passed through the auditions in Season 1, but withdrew from the competition after one of the members sustained an ankle injury. They returned in Season 2 and finished in the Final 8.

Based out of Los Angeles, Sideswipe has performed hundreds of live shows around the world and starred in numerous hit films and TV shows.

With martial arts being ever present in all media, Matt Mullins created the Sideswipe Performance Team. Sideswipe took movements from all styles of martial arts such as wushu, tae kwon do and capoeira, and then combined them with music and dance choreography to create a unique style of martial arts performance called Xtreme Martial Arts.

Sideswipe has created performances with their high-energy routines for musical artists such as Britney Spears, and Fortune 500 companies like Nike, Microsoft and FedEx. The unique style of Sideswipe performers have been featured in hit movies as GI Joe: Rise of the Cobra and The CW hit kid show Kamen Rider: Dragon Knight. Some of the most memorable and most-viewed commercials of recent history have featured Sideswipe members, including ads for Pepsi, Motorola and Samsung. [1]

Sideswipe's audition in Episode 102 consisted of dancing and performing acrobatic feats such as flipping to energetic music. Piers Morgan, Brandy Norwood, and David Hasselhoff all voted "Yes," sending the act to the Semifinals. 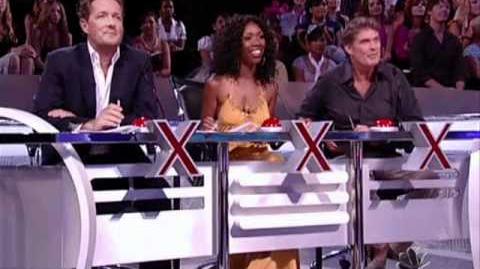 Before the Semifinals, Sideswipe was forced to withdraw from the competition when one of its members sustained an ankle injury.

Sideswipe returned in Season 2 with one new member and as "Sideswipe." Sideswipe's audition in Episode 203 consisted of performing various martial arts moves simultaneously to "Hey Driver." Piers Morgan, Sharon Osbourne, and David Hasselhoff all voted "Yes", sending the group to the Vegas Round. 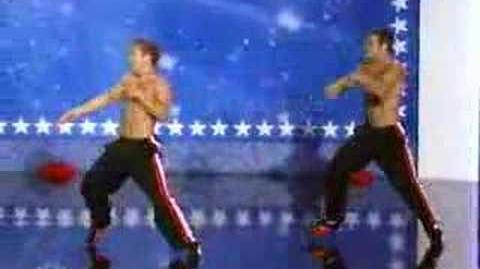 Sideswipe on America's Got Talent
Audition

Sideswipe was sorted into the "Variety" category during the Vegas Round. The group members' performance in Episode 205 consisted of a martial arts dance routine. Their audition was strong enough for the judges to send them to the Semifinals in Episode 206.

Sideswipe's Semifinals performance in Episode 207 consisted of giving a martial arts dance routine. The group received enough votes to be sent to the Top 10 in Episode 208. 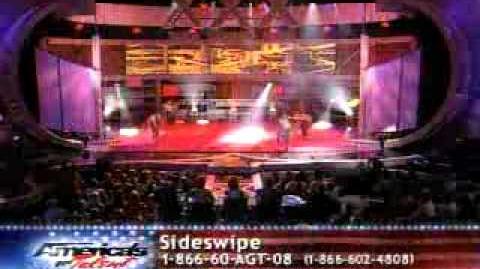 Sideswipe's Top 10 performance in Episode 209 started off with a martial arts routine with just the four main members. Later on, their students came out on stage and joined them in the routine. Because of this, Piers Morgan buzzed the act. Nevertheless, Sideswipe still received enough votes to be sent to the Final 8 the following week.

Sideswipe's Final 8 performance in Episode 210 consisted of a pirate-themed martial arts dance routine. Its members did not receive enough votes to be sent to the Final 4, eliminating them from the competition in Episode 211. 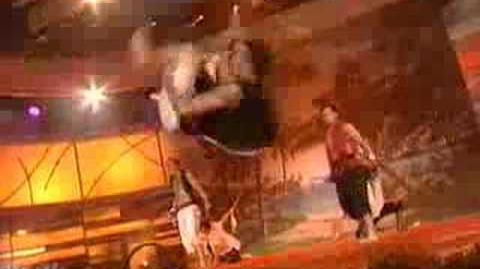 Retrieved from "https://agt.fandom.com/wiki/Sideswipe?oldid=175201"
Community content is available under CC-BY-SA unless otherwise noted.