America's Got Talent Wiki
Register
Don't have an account?
Sign In
Advertisement
in: Acts, Accepted Acts, Danger Acts,
and 6 more

Withdrew
Silvia Silvia was a crossbow archer act from Season 10 of America's Got Talent. She withdrew from the competition.

Silvia Silvia is the mother of fellow season 10 act Paul Ponce and wife of Victor Ponce. She is from the third generation of a circus family. She met Victor when she was 11 years old in the circus of her family. She is the "boss" of the family.

Silvia Silvia's audition in Episode 1006 consisted of shooting arrows from a crossbow in the direction of her husband Victor. Tricks included shooting two balloons with two crossbows at once and shooting five balloons around Victor with five crossbows. Howard Stern, Heidi Klum, Mel B, and Howie Mandel all voted "Yes," sending Silvia to the Judge Cuts round. 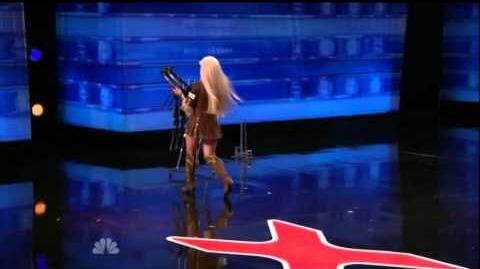 Silvia Silvia's Judge Cuts performance in Episode 1008 consisted of shooting with a crossbow a balloon in between a glass bottle and a thin platform that her husband Victor caught the bottle with. She then shot at a target causing a set-up chain reaction which eventually pierced an apple on the top of her head. Howard Stern, Heidi Klum, and Mel B gave her standing ovations. Silvia's performance was strong enough for the judges to send her to the Quarterfinals instead of her son Paul Ponce. 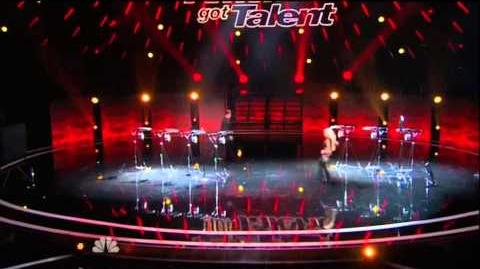 Silvia Silvia withdrew from the competition before the Quarterfinals began. This was because she had a contract to perform elsewhere and could not break it. Her spot was given to either Alondra Santos or DADitude!.