Judge Cuts
Sixto and Lucia were a quick change duo from Season 13 of America's Got Talent. They were eliminated in the Judge Cuts.

Both decided to leave their full time careers behind - Nogueira was a great magician and had studied Law for three years, while Rivera had studied geography, but also worked as a professional dancer, actor and model - to take a leap of faith.

They had a lot of uphill struggles, but now - seven years later - they are on top of their game.

“We did research and studied hard to find our form. There are many forms of doing this, but we like the one we have. In the beginning, we had to sell our only computer to make enough money for the costumes and we held special parties to raise money. We would go to the streets to practise at 3 am, when nobody could see, as it was the only place we knew we had so much space to practise.

“I remember one friend who told us the next day he had been walking home very drunk, and saw me doing quick change practice and thought he had seen true magic, as he couldn’t believe what he was seeing,” said Rivera, recalling with a smile.

When asked about their emotions before a performance, the duo said: “Before the show, we still get a little nervous, but we calm ourselves with a ritual - we say a little prayer and give each other a kiss. Then we tell ourselves to enjoy the performance. It is very important to enjoy the show so that the audience can feel our energy.

“It doesn’t matter what is going on in our private lives - if we are sad or tired - once the curtain goes up, we enjoy and give all to our audience.”

Some of the highlights of their career date back to 2010 after the earthquake in Haiti, they decided to go and volunteer for 41 days with a project called Mission Sonrisa (Mission Smile).

“We did our act at hospitals, orphanages, on the streets, schools - anywhere. It was so rewarding to see sad faces smile. “We’re also very proud about our appearance on the biggest Magician TV show in France, called Le Plus Grand Cabaret Du Monde. We were the first Cuban residents to appear on the show. We opened the show and received a standing ovation for which we are still extremely proud.”

Nogueira urged the community to see them perform in March at the Suncoast Casino. “This it is the greatest art from in the world. In a good circus, you can experience everything - fear, excitement, beauty and danger. We love this quote from Federico Felini: ‘The circus is not only a show, it’s also an experience, a voyage through astonishment, the imagination, mockery, the absurd and the denial of cold logic. It is unique, the real Show’,” he said.

Their message to those that want to join the circus is: “Don’t think twice, just do it. Then you will fall in love." [1]

Sixto and Lucia's audition in Episode 1303 consisted of performing a quick change routine to Jennifer Lopez's "Let's Get Loud". Lucia changed in multiple black curtains, with Sixto changing once as well. She also changed behind a blue cloth. Finally, the duo switched Tyra’s outfit, leaving the judges stunned. Lucia changed 9 times in 90 seconds. Howie Mandel, Mel B, Heidi Klum, and Simon Cowell all voted "Yes", sending the duo to the Judge Cuts. 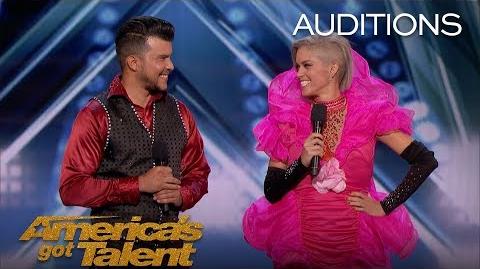 Sixto and Lucia's Judge Cuts performance in Episode 1310 consisted of doing quick change to Enrique Iglesias' "I Like It." Mel B, Heidi Klum, Simon Cowell and guest judge Chris Hardwick gave them standing ovations. Their performance was not strong enough to advance to the Quarterfinals, eliminating them from the competition.