Judge Cuts
Sophie Fatu was a singer act from Season 13 of America's Got Talent. She was eliminated in the Judge Cuts.

Sophie started her singing career at the age of 4, when she was featured on NBC's "Little Big Shots" with Steve Harvey. Her viral videos of her Sinatra covers earned love of fans all over the world. At the age of 5, Sophie was first invited to The Ellen DeGeneres Show, where she performed "Fly Me to the Moon". Sophie Fatu has been featured in print magazines, and represented over 50 brands, among which are ModerneChild, Kardashian Kids, P.O.K. Fashion, Feltman Brothers, OvertheLoom, Sweet and Swag, PettiGirl e.t.c. [1]

Sophie Fatu's audition in Episode 1303 consisted of singing Frank Sinatra's "My Way." Howie Mandel, Mel B, Heidi Klum, and Simon Cowell all voted "Yes," sending her to the Judge Cuts. 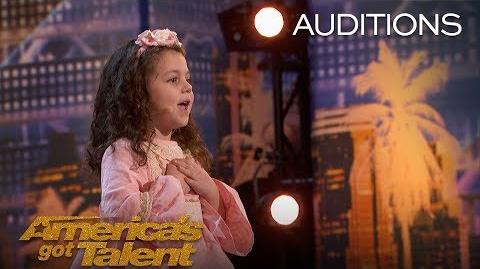 Sophie Fatu's Judge Cuts performance in Episode 1308 consisted of singing Frank Sinatra's "New York, New York". Howie Mandel, Mel B, Heidi Klum, Simon Cowell and guest judge Olivia Munn gave her standing ovations. Her performance was not strong enough to advance to the Quarterfinals, eliminating her from the competition along with The Melisizwe Brothers and Macey Mac.