Southern Dance Academy was a clogging group act from Season 11 of America's Got Talent. It was eliminated before the Judge Cuts.

Southern Dance Academy is located in Gaffney, South Carolina, and offers award winning dance instruction for all ages in dance styles such as clogging. [1]

Southern Dance Academy's audition in Episode 1105 consisted of clogging as a group to Missy Elliott's "WTF (Where They From)". Howie Mandel, Mel B, Heidi Klum, and Simon Cowell all voted "Yes," sending the group to the Judge Cuts. One member was a big fan of Howie, so he joined the stage to give her a hug. 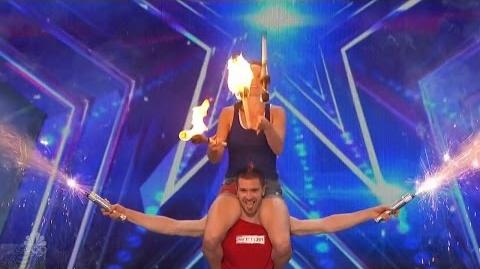 Southern Dance Academy did not perform in the Judge Cuts round, meaning it either withdrew or was cut by the judges before this stage of the competition.

Retrieved from "https://agt.fandom.com/wiki/Southern_Dance_Academy?oldid=87297"
Community content is available under CC-BY-SA unless otherwise noted.