America's Got Talent Wiki
Register
Don't have an account?
Sign In
Advertisement
in: Acts, Bands, Drag Acts,
and 8 more

Auditions
Spice Pistols were a band from Season 13 of America's Got Talent. They were eliminated in the audition round.

Formed in 2016, the Spice Pistols feature five middle-aged men in dresses mashing the music and visuals of the Spice Girls and the Sex Pistols. The band includes bassist Sppike Mike Muellenberg (Elements, League of Liars), along with other members from Captain Viejo, Sex Stains, Konvix, the Accessories, and True Stories.

"We don't wanna admit we actually like Spice Girls songs," says the band, "so we play 'em the way Sid Vicious, Steve Jones, Paul Cook, and Johnny Rotten would have." [1]

Spice Pistols's audition in Episode 1306 consisted of performing Spice Girls' "Wannabe". Howie Mandel (Simon buzzed for him), Mel B (Simon buzzed for her), Heidi Klum, and Simon Cowell all buzzed the act. The full verdict was not televised, but although Howie and Mel voted "Yes", Heidi and Simon voted "No", eliminating the group from the competition. 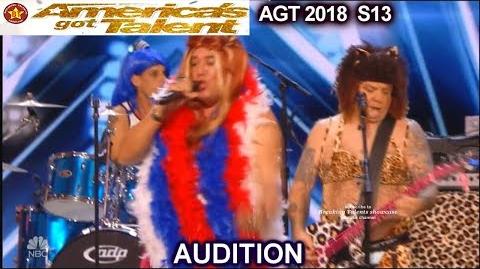