Withdrew
Sydney "The Kid" Park was a stand-up comedienne act from Season 1 of America's Got Talent. She left the competition before the Semifinals.

At the age of six, Sydney became the youngest comedian to ever perform at the famous Hollywood Improv. [1] When she auditioned for America's Got Talent, she was in the third grade.

Sydney "The Kid" Park's audition in Episode 101 of joking about topics such as being bothered by very little boys, her mother, and "fat black ladies" wearing her clothes. Piers Morgan, Brandy Norwood, and David Hasselhoff all voted "Yes," sending Sydney to the Semifinals. 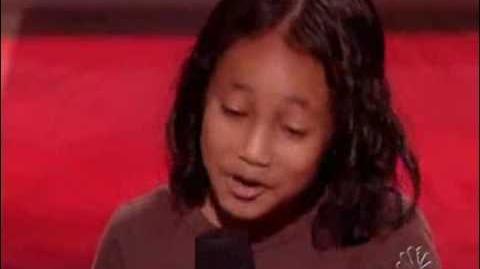 Sydney Park left the competition before the Semifinals for undisclosed reasons.

Sydney had a recurring role on the Disney Channel program, That's So Raven, where she played 'Sydney' a young aspiring standup comic. [2] In 2010, Sydney was casted to play the role of Jo Danville's daughter in CSI: NY. [3]